DISCOVER PRAGUE!
HomeNewsThe Metro Will Be Wheelchair Accessible At Major Stations by 2025
News

The Metro Will Be Wheelchair Accessible At Major Stations by 2025 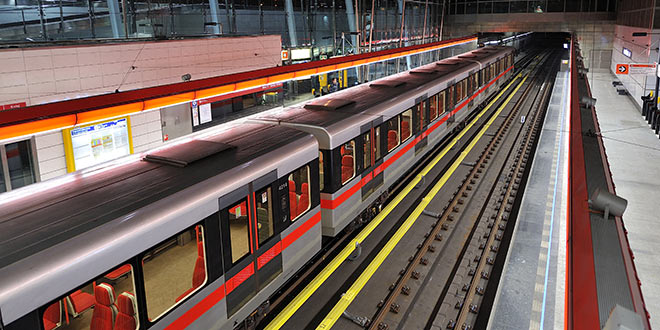 By 2025, the transport company must build lifts in nineteen metro stations. It does not have the money yet.

More than 100,000 suitcases have already been carried by porters from the station hall of the Nádraží Veleslavín Station to the bus stop of the same name during 2015. And their job does not end there by far, even though it is considered to be unnecessary by many people. This is due to the fact that the city will not yet begin the modification of the entrance to the subway station, which it had promised immediately after commissioning the extended metro line A. This modification would, for example, allow the installation of a special luggage-carrying belt on the stairway.

The builders will begin with the modification of the entrance to the subway station no earlier than 2016. Whether the porters, who the airport pays, will last here until then is not entirely clear yet. “At the moment, we do not even know whether they will also help with the luggage over the winter. We are constantly evaluating the service of the porters. It has been appreciated by people thus far, “says Michal Řehořek from the press department of the Václav Havel Airport.

However, the Veleslavín Station by far isn’t the only station at which it is necessary to provide better access for passengers, according to the magistrate. Altogether nineteen metro stations are still not wheelchair accessible. This means that passenger can only get to their platforms using escalators. This makes it virtually impossible for wheelchair users and other people with limited mobility to get off on the spot. The transport company is, therefore, planning to build new lifts to the platform. This week, one such lift was put into operation in the Anděl metro station. In February next year, it will open another one in Můstek.

“We are currently also launching the construction of a lift in the Roztyly station. Next year, we want to start building a lift in the Palmovka station, and then one in the Karlovo náměstí station the year after that,” explains the spokesman of the transport company Jiří Štábl.

The plan of the magistrate is for all the stations to be wheelchair accessible by 2025. This term is, however, already questioned by some.

“The construction of new lifts in the old metro stations is not cheap. Thus far, the transport company has been receiving money from European funds. However, this will no longer be possible next year. In the transport company, they are sceptical about whether it will be possible to get the funds, “said a trustworthy source of MF DNES, who deals with the issue.

His words are also confirmed by the management of the company. It claims that it can equip nineteen stations with new lifts within ten years, but only under certain conditions. “If the capital city will provide sufficient funds for accessibility, it is realistic. However, we cannot do it from our resources alone, ” adds Štábl.

The price of lifts for one metro station is typically in the order of several tens of millions of crowns. The transport company paid 93 million crowns for wheelchair access at the Anděl station and nearly 70 million for the lift at the I. P. Pavlova station.

The transport company will, however, have to prepare more money overall for the construction of some other lifts. One station that could become problematic is Staroměstská, which is located directly within the Prague Conservation Area. The installation of a lift at the Náměstí Míru station will probably also be more expensive. This is due to the fact that the platform is located 53 meters below the surface, which makes the work more complicated and expensive.

Furthermore, the transport company would not even save money by installing sloping platforms instead of lifts in some stations, which are known to passengers from stations such Nové Butovice and Smíchovské nádraží. „We are no longer considering sloping staircase platforms. They did not prove to be a good solution,“ says Štábl.

According to him, the stations Hradčanská, Malostranská and Kačerov will be the very last to get a new lift.

According to the Association of Assistance, which helps people in wheelchairs, it is important to deal with other complications in the subway beside lifts. “Some people in wheelchairs do not use the subway because they are concerned about the gap between the edge of the platform and the floor of the trainset. It is often so wide that people can fall from their wheelchair, “explains the head of the association Erik Čipera.

The transport company is considering the possibility of putting a special rubber belt on the edge of the platform, which would practically make this gap disappear.