DISCOVER PRAGUE!
HomeNewsThe New Subway Has No Escalator. An Inconvenience for Passengers Travelling to...
News

The New Subway Has No Escalator. An Inconvenience for Passengers Travelling to the Airport 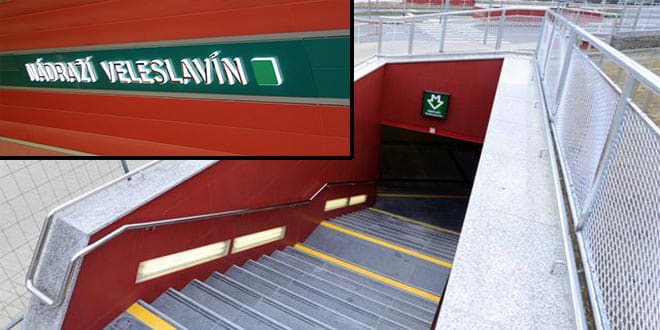 It cost billions of crowns, but there was not enough money for an escalator? This question will come to mind of the passengers at the metro station Veleslavín, who will need to change from a subway to an airport-bound bus. In the area where we can expect the constant movement of people with heavy luggage, there is just an immobile solid staircase. There will have to be porters to help people with luggage.

From next week, people who need to take bus 119 to the airport will not get out the subway at Dejvická, but at the new station Veleslavín.

Although city officials point out that the journey to Ruzyně will become faster, it will certainly not be more comfortable.

The shortest way from the lobby to the bus leads along a solid staircase (the escalator, which you see in some pictures, leads from the platform into the lobby only). There is an elevator, but on the surface, its outlet is only behind the crossroads, about 70 metres from the terminal.

“Passengers at the metro station Veleslavín will be served by porters, who will help them with luggage and direct them to the bus stop of line 119,” said the chairman of Prague Airport.

Prague Airport, according to its spokeswoman Marika Janoušková, decided to offer this service from its own initiative because it is aware of the absence of escalators.

To provide the porters, the airport hired an external agency. The service will be free, and passengers will be able to use it every day between 5:00 and 22:00, almost the whole time of metro operation, except late at night when only a few airplanes land or depart from Ruzyně. The porters should operate at the station at least until the end of the year.

Anyway, it is assumed that a lot of passengers, especially those with larger amounts of luggage, will prefer to choose convenient transportation by taxi this year or will use their car.

During the day there will be two porters to help people with luggage. During periods of lower traffic, there will be one. They will wear a reflective vest with inscriptions in Czech and English.

“They will have a business card with a photo and name and logo of our company. They should be able to carry some 20-30 kg, which is the maximum weight of the baggage allowed for transport by a plane. Depending on how successful the service is, we could set an official dress code for the porters later.”

The airport spokesperson warned already during the construction of the new section of metro line A that escalators from the lobby to the bus terminal are desirable. Eventually, however, they were not built. The Airport still wants to discuss this.

The City of Prague Transport Company denies having forgotten about the escalators.

“The fact that there are no escalators is not our mistake. The present solution, when the bus to the airport departs from the subway station Veleslavín, is only a temporary situation. In 2008 when the project was designed, the airport did not request any escalators because it was not planned that the airport-bound bus would leave from here,” Mr Štábl explained.

In future people will be transported to the airport not by public transport, but by railway.

“The final long-term solution is the construction of a high-speed railway, which would connect the airport to the city centre. This is what the Veleslavín station was designed for. In its lobby, from where the escalator leads to the platform and the underpass, there is prepared a connection directly to a railway station. Unfortunately, the City of Prague Transport Company cannot influence when the railway is modernised, ” the spokesperson said.