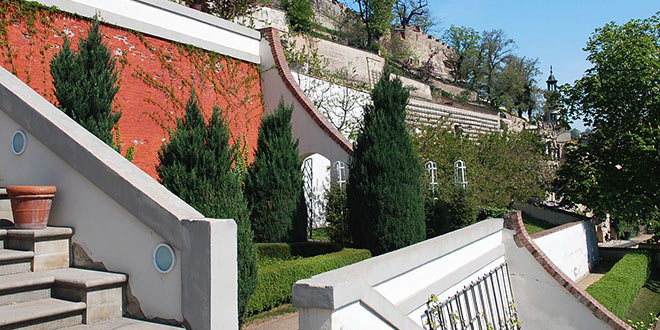 The Palace Gardens are situated on the southern slopes of the hill crowned by Prague Castle. They consist of five historic gardens: the Ledebour Garden, the Small Palffy Garden, the Great Palffy Garden, the Kolowrat Garden and the Small Fürstenberg Garden. These gardens represent a unique historical complex, one of the most significant Baroque gardens in Europe. Due to the lack of maintenance, these beautiful and historically priceless objects reached a state of catastrophe and were closed to the public in the seventies. It was not until 1989 that reconstruction commenced, led by the new owner – the State Preservation Institute. Governmental funds bankrolled the reconstruction with a substantial contribution by the Prague Heritage Fund. This was done under the supervision of His Royal Highness the Prince of Wales and Václav Havel, the Czech president. During the first phase, the Ledebour and Small Pálffy Gardens underwent reconstruction. These gardens were reopened to the public in June 1995. The second phase – finishing in August 2000 – covers the three remaining gardens (the Great Pálffy Garden was opened in 1997).

In the Small and Great Gardens, vineyards and gardens are documented as early as 1454. An engraving from 1685 depicts a large, terrace-like Renaissance-Italian garden at this location. Today’s design – or rather the architectural concept of what has been preserved – goes back to 1751. It is the result of a reconstruction carried out by the aristocratic Fürstenberk family. Despite several reconstructions that followed, the original Baroque design remained preserved, namely, the terrace-like setting, the axis location of the central stairs, the alteration of vacant and planted sections and many remarkable architectural motifs, including many well-preserved relics of art decoration, etc. Unlike other decorative and entertainment gardens, the Kolowrat Garden has a four-purpose character. Its concept is much more modest and far less demonstrative. Also, where the Small Fürstenberg Garden is located, there used to be a vineyard and a utility garden in 1517. However, a decorative garden was found here in 1580. In 1784, Lady Marie Barbora Cernínová applied a highly demanding concept of a Baroque garden, designed according to Italian models by architect Ignatius Palliardi. Ledebour Garden is a Baroque terrace garden from the first third of the 18th century, in about 1787, styled most probably by I. J. Palliardi. In between the salla terrena and the opposite-side wall, flat with the staircase and the fountain with a giant statue of a potter with a recently-built basin.

The Palace Gardens are a great place to enjoy relaxation, pleasant strolls in a beautifully cultivated area with statues, fountains and Baroque summer houses, and unforgettable views of the capital. The gardens are linked by and are accessible from both Wallenstein streets and the Prague Castle garden called ‘Na Valech’. 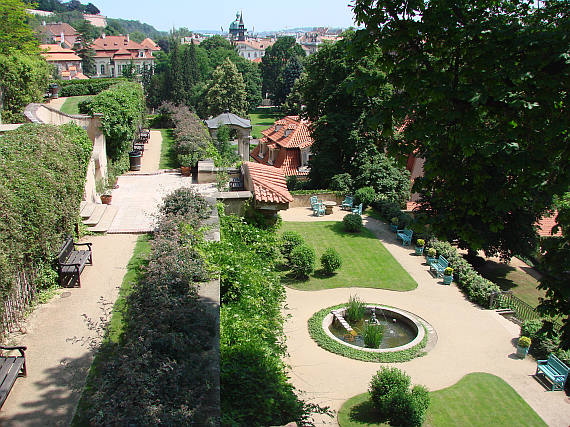