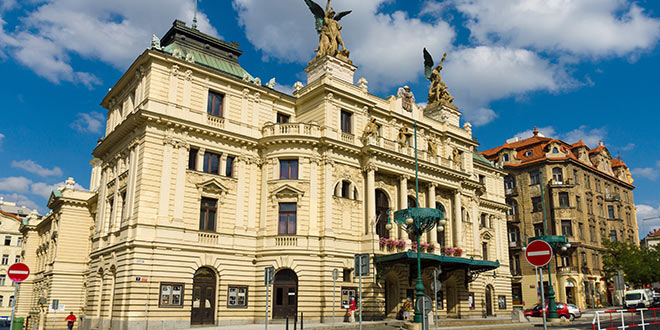 Close to the Náměstí Míru Square, you cannot miss the majestic Art Nouveau building of the Vinohrady Theatre, one of Prague’s oldest and most reputable theatres.

The necessity to establish another theatre so that Prague cultural life could flourish had been discussed even before the National Theatre was opened to the public. Vinohrady municipal council approved the proposal in 1892 to apply for a Czech theatre establishment concession. Two years later, in 1902, a competition of tenders for architects of the Slavonic nations was announced; out of the twelve accepted designs, the winner was appointed – Alois Čenský. 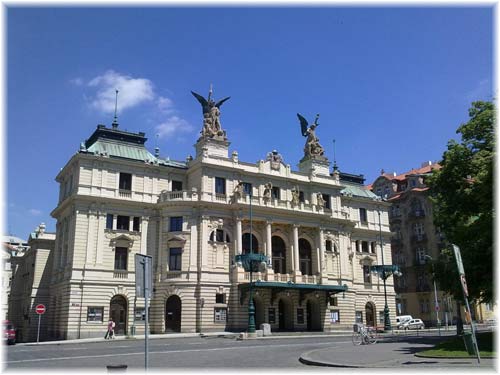 The foundation stone was laid in 1905 on Patron Saint Wenceslas Day. It only took two years to build such an impressive building, and in the spring of 1907, Prague’s cultural public was eager to observe the final works.

On November 24, 1907, the majestic Art Nouveau Municipal Theatre of Royal Vinohrady opened its doors. The production was Jaroslav Vrchlický´s play based on the life of Lady Godiva, the 11th-century benefactress who supported the townsfolk against her husband´s oppressive taxation by riding naked through the streets of Coventry.

Two years later, two parallel theatre ensembles performed in the Municipal Theatre of Royal Vinohrady dramatic and opera/operetta ensembles. Such a situation continued for twelve years, then the opera ensemble left the theatre, and it became a dramatic theatre solely – as was the original purpose.

After the merging of Royal Vinohrady with Prague on February 5, 1922, Prague mayor Karel Baxa assumed the theatre building in the name of the Czech capital, Prague. The Vinohrady Theatre became one of the Prague City theatres.

Towards the end of 1928, a new chief director was appointed; Jan Bor, journalist, critic, and director – successor to the previous director, Jaroslav Kvapil. From his artistic time period in the Vinohrady Theatre we can point to dramatic stagings of FM Dostojevsky, with the excellent cast of Zdeněk Štěpánek, Frantisek Smolík, František Kreuzmann, Jiří Plachý, Míla Pačová, or Olga Schneipflugová.
Between 1935 and 1940, the director of the Municipal Theatre of Royal Vinohrady was Dr Bedřich Jahn; however, he was sacked, and Dr Vladimír Říha took over his post. His management lasted less than a year, till September 30, 1941, when the theatre was officially closed to the public. The ban lasted till the end of January 1943. German filmmakers took possession of the well-maintained building, quite unjustly, and made hay of the interior. Nazi propaganda was bitterly contemptuous of everything made by the Czechs, or, to be exact, the Slavonians.
However, interiors were destroyed, but Hitler managed to drag down several innocent people by ascribing underground activities to them. Cloakroom attendant Marie Spilková was executed, as well as Anna Letenská, who died in Mauthausen. Rest in peace!

The Vinohrady drama ensemble had to move to the Karlín Variety Theatre, where the director was compelled to start all dramatic activities, and the theatre was renamed Kajetán Tyl Theatre. František Götz, an artistic director, managed to adapt his plans to inconvenient circumstances. The theatre could present its performances, playing to a full house, till the closure of all theatres in August 1944.
Immediately after World War II, in May 1945, the Municipal Theatre of Royal Vinohrady returned to its former building. Many hands were ready and willing to clear away all the damage to the property; thus, the theatre could open as early as June.

From July 1, 1960, the Central Theatre of the Czechoslovak Army´s main keeper became the Prague City People´s Committee. Its title – the Central Theatre of the Czechoslovak Army – remained only as an honorary title. Between 1960 and 1965, dramatist and director Luboš Pistorius became the director of the Vinohrady scene. After his demise, František Pavlíček became the new head of the theatre. He succeeded in extricating the theatre from the influence of the Ministry of Defence, and it was renamed The Vinohrady Theatre again.

In spite of the sad fact that the repertoire had to be a product of its time, the theatre management was able to keep abreast of the times, so as not to disappoint its audience. The Municipal Theatre could always be proud of its starring actors: this time period was characterised by, for example, Václav Vydra, Jaroslav Vojta, Bedřich Karen, Roman Tuma, Anna Iblová a další, Dnes v divadle účinkují například Petr Kostka, Hana Maciuchová, Zlata Adamovská, Viktor Preiss, Otakar Brousek, Jana Hlaváčová, Jiřina Jirásková, Daniela Kolářová, Ilja Racek, Jaroslav Satoranský, Veronika Žilková, Jan Šťastný, Václav Vydra mladší, Svatopluk Skopal and Ladislav Frej.

In 1990 the director’s post was opened to competition – Jiřina Jirásková attained the post on May 30. Her management lasted for ten years, until June 30, 2000. The current director is Jindřich Gregorini, and the artistic director is Martin Stropnický. 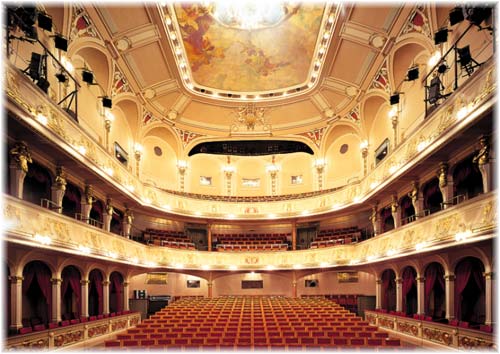