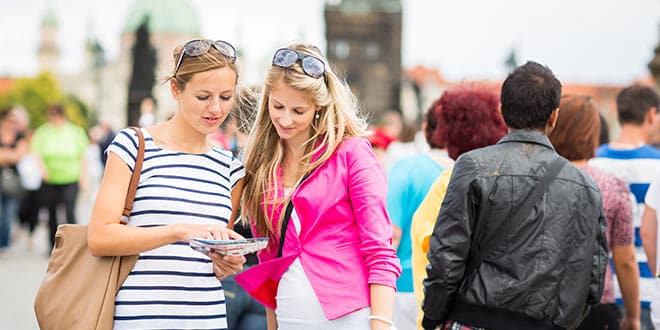 Our walk starts at Wenceslas Square, which represents the commercial and social centre of modern Prague. This square, known as the Horse Market until 1848, is dominated by the National Museum and the statue of St. Wenceslas I, the nation’s patron saint.

We continue our walk down the square to Na Příkopě Street, a pedestrian promenade that is one of Prague’s most exclusive shopping districts. There are also several historic houses nestled among the modern banks, boutiques and department stores lining this street. Na Příkopě translates into “in the ditch” since this site used by a moat.

At the end of Na Příkopě is the Powder Tower, an impressive 85-metre high, a late Gothic monument located on the Old Town and New Town boundary. The name derives from the fact that it was once used to store gunpowder.

Next to the Powder Tower is the Municipal House – a beautiful example of the Czech Art Nouveau architectural style. It was built on the former site of the Royal Court between 1906 and 1912 and was completely restored in the mid-1990s.

Passing under the Powder Tower, we will follow Celetná Street to Old Town Square. On the way, we will see the Estates Theatre, a National Cultural Monument that was built between 1781 and 1783. The world premiere of Mozart’s Don Giovanni took place here in 1787. It is interesting to note that shortly before the reconstruction of the building in 1983, the internationally known Czech director, Miloš Forman, used this building for his movie about Mozart, Amadeus.

The Old Town Square, like Prague Castle, is one of the most visited historical sites in Prague and offers a unique blending of historic architectural styles. This square, the city’s main marketplace during the 11th and 12th centuries has always been a gathering point for Prague’s citizens on both solemn and joyful occasions.

Particular points of interest here are the City Hall with its popular horologe, or astronomical clock, installed by Master Hanuš in 1410; the Church, Our Lady of Tyn, which was built in 1365 on the site of an earlier Romanesque Church; Saint Nicholas Church, a domed, Baroque-styled church built between 1732 and 1737 and located at the beginning of Pařížská Street, another exclusive shopping and dining district.

From the Old Town Square, we will follow the original royal coronation route to Karlova Street, which leads to the often-photographed Charles Bridge with its 30 imposing statues situated along each side. A Gothic structure built in 1357 to replace the earlier Judith Bridge, Charles Bridge spans the Vltava River and connects the Old Town to Lesser Town. You may notice that one statue with a brass relief is rubbed shiny in one spot. This, the statue of St. John of Nepomuk, who was the vicar of the Archbishopric of Prague, Is significant because Emperor Wenceslas IV had Nepomuk thrown from the bridge when Nepomuk would not reveal the confession of his wife, Queen Sophia. If you rub the brass relief with your hand (notice how shiny it is), it is supposed to bring you good luck.

As you approach the Lesser Town side of the bridge, Kampa Island is on your right. This is a very romantic island with several excellent restaurants separated from the Lesser Town by a branch of the Vltava River called the Devil’s Stream (Čertovka). It is often called Prague’s “Venice”. Once you are across the bridge, you will follow Mostecká Street to the Lesser Town Square and the Baroque-style St. Nicholas Church with its 70-metre-high domed cupola. There is also a very intricately designed Plague Column with a group of statues representing the Holy Trinity, designed by Giuseppe Alliprandi in 1715. These statues, examples of which are located throughout Europe, were erected as an expression of thanks for the end of the plague. From the square, it is only a five-minute walk to Nerudova Street, one of the most intriguing streets in the Lesser Town with interesting shops, art galleries and restaurants. Named for the famous Czech poet and journalist Jan Neruda, this street takes us to Prague Castle.

The entire castle complex, including Belvedere (the Royal Summer Palace) and the castle grounds up to Strahov Monastery, are known as Hradčany — the name of the original town on this site. As you stand on the square in front of Prague Castle and view the city lying below, you will understand why this complex of secular and sacred buildings has remained the centre of the Czech State and church power since the time of its origin. The imposing character of the whole Castle area and its exceptional location create a compact and perfectly combined whole despite the diverse architectural styles. The Castle is now the seat of the president of the Czech Republic. It is also the domain of the crown jewels, as well as permanent art collections and occasional exhibitions.

From the Castle’s third courtyard, you can enter St. Vitus Cathedral, which stands on the site of a chapel that Prince Wenceslas dedicated to St. Vitus in 925 AD. The construction of the current cathedral was started in the mid-1300s but was not completed until 1929, a span of over 500 years. Exiting the cathedral, you can visit the Old Royal Palace, parts of which have been carefully preserved, especially Vladislav Hall and the archaeological diggings in the basement level. The Romanesque basilica of St. George, which is the oldest surviving Romanesque church, is located directly behind St. Vitus.

We will finish the castle walk by visiting Golden Lane, where alchemists commissioned by Emperor Rudolf II lived and worked trying to create gold. Today, the Lane is home to quaint shops and boutiques and a museum of historical costumes and weapons. In more recent times, the most famous resident was the author, Franz Kafka, who rented house number 22 for several months between 1916 and 1917, where he wrote his book A Country Doctor. A small bookstore is now open here in his honour.

First, we will visit the Old-New Synagogue on Cervena Street, which is the oldest synagogue in Europe. It was built around 1270 in the early Gothic style and ranked among the oldest preserved Gothic monuments in Prague. Next, we will visit the Jewish City Hall on Maiselova Street, which features two clock towers. While one is normal, the second has Hebrew figures, and the hands go counter-clockwise since Hebrew is read from right to left. Only a few steps from the City Hall is the Maisel Synagogue, which was founded in 1590 by Mordechai Maisel, the mayor of the Jewish Town during the time of Rudolph II, as a family place of prayer.

The Pinkas Synagogue, located on Široká Street, is memorable for its handwritten inscriptions of the names of the 77,297 Czech Jews who were victims of Nazism. Although the original building site dates back to the 11th century, in 1625, it was reconstructed in the Renaissance style.

The Jewish Cemetery, the second oldest undamaged Jewish cemetery in Europe (after the cemetery in Worms, Germany), not only survived the period of Nazi occupation but numerous other anti-Semitic pogroms over the years. Serene and tranquil under its ancient elder trees are thousands of graves dating from 1439 to 1787.

What to See in Prague