Visit the Brothel Where Franz Kafka and Bismarck Used to Go 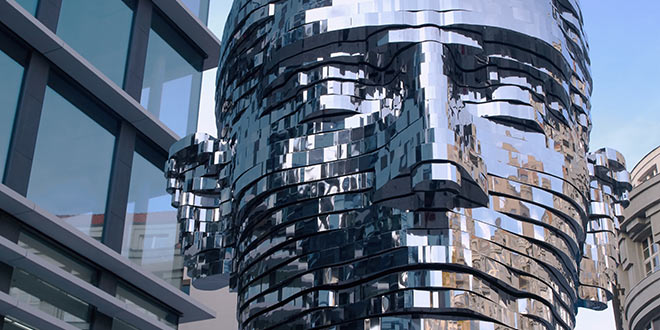 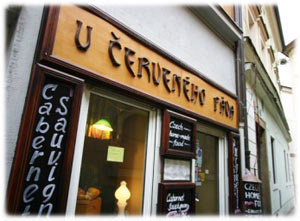 If it were today, paparazzi would have unprecedented harvests. To catch a successor to the throne,
a famous writer, or a statesman of high standing in a brothel is certainly a dream of any of them. But 145 years ago, they would not have got a look-in: Perhaps everybody who cut a figure at that time had to visit the luxurious Prague saloon U Goldschmiedů (At Goldschmied’s) of that time. It was a matter of social conventions, and nobody was surprised that Emperor Charles I also used to be a regular visitor in that place.

As early as in the Middle Ages, the Old Town narrow Kamzíková little street was where prostitution was concentrated in Prague. There were brothels here and there in the vicinity of Karolinum. But it did not become famous before the moment when the Prague second-hand dealer and coffee-house proprietor Emanuel Goldschmied bought the local house U červeného páva (At the Red Peacock’s) in 1866 and built a saloon “with female service” there.

The saloon U Goldschmeidů, which was called Gogo by its famous visitors, was luxuriously furnished. There were armchairs and large mirrors on the ground floor. Girls led their clients from there up the steep stairs to higher floors where stylish rooms were situated. Gentlemen could choose whether they would be serviced, e.g. in the “Turkish”, “Persian, “Japanese” or “Doctor’s” room.

One of the first famous visitors was Otto von Bismarck, the future German “Iron” Chancellor, in 1866. Together with Prussian officers, he spent the night after the Battle of Sadová there. They say that he ran the steep stairs as many as six times, with a different girl each time.

The play Piccaver v salonu Goldschmied (Piccaver in the Saloon Goldschmied) also tells about this very business. Its author is none other than the world-famous writer Franz Kafka, a regular visitor in that place, like the composer Gustav Mahler. According to stories, always at night, he broke into one of the rooms where he composed using the piano. And another of the visitors, the writer Franz Werfel (The saloon Gogo is the scene of his novella “Dům smutku” (House of Mourning)), was one day to marry Mahler’s wife of that time… The nightlife was also “studied” by the passionate journalist Egon Ervín Kisch and the German poet Christian Morgenstern there.

But even representatives of the top echelons did not avoid the saloon Gogo. It was visited by Ferdinand d´ Este, a successor to the throne, for example. And later also his son, the last Austrian Emperor Charles I, used often to be there.

Time Has Covered All Traces of the Presence; Only the Famous Stairs Have Remained

The fame of the most reputable Prague brothel was snuffed out suddenly in 1922, when prostitution, which was legal until that time, was prohibited within the Act on Fighting Venereal Diseases. At the beginning of the 30s of the last century, the house was bought by an important Prague solicitor who had it completely reconstructed.

“Today, only flats are all over this place,” says Milan Richter, a grandson of the owner. “We have tried to find at least the entrance to the underground passage in the basement. It should have led to the Celetná Street, and visitors have been said to escape that way when there was a raid on the saloon. My grandparent has mentioned it, but we have not found anything, even with a pneumatic drill,” he states.

And so the famous brothel is only recalled by the original wood stairs up which Chancellor Bismarck ran like a chamois, and the stylish restaurant U červeného páva on the ground floor, trying to evoke by its atmosphere and antique piano at least a bit the atmosphere of the famous saloon Gogo of that time.