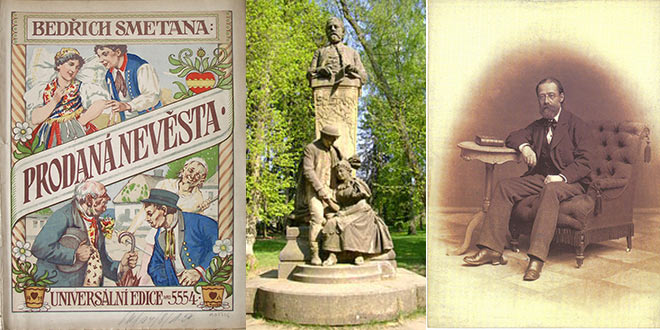 All the three main composers linked to Prague—Smetana, Dvořák and Mozart—have a museum dedicated to their work and life in the city.

Throughout his frequent trips to Prague, Mozart lodged with friends in the small, picturesque, Neoclassic Villa Bertramka, now called the Mozart Museum. Mozart always felt more loved in Prague than he did in his native country, and the villa, bordered by a tranquil garden, conserves artefacts from the time he spent there. Informal concerts are hosted some evenings and afternoons, either in the small concert hall or in the garden (entry to the museum -110CZK, each day April to October 09:30 to 18:00, November to March 09:30 to 17:00, Mozartova 169, at Praha 5; from the Metro: Anděl is a ten-minute walk—go towards Hotel Móvenpick, then head up the alley to the rear of the hotel; telephone: 257 317 465, www.bertramka.cz).

Smetana was Czech classical music’s founder. His statue is situated at the front of Smetana Museum, intently listening to the sound of the River Vltava, close to Charles Bridge (entry to the museum – 50CZK, Wednesday to Monday 10:00 to 17:00, shut Tuesday, Novotného Lávka, at Praha 1, telephone: 224 229 075). Like the German Richard Wagner, Smetana wanted to arouse the nationalist, romantic spirit of the Czech people. His best piece, the series of symphonic poems named Má Vlast (My Country), was based on myths and places symbolic to the Czechs. The most beautiful poem, Vltava, is read to attract your attention while trains arrive at the stations.

Dvořák is the most famous composer in the Czech Republic. For three years, Dvořák was the director of the New York National Conservatory. He wrote his most well-known work throughout this time, Z Nového Světa (the New World Symphony). The advice Dvořák gave to his pupils was to search for inspiration from the authentic melodies of America (Native American music and African American spirituals) instead of European models. Rusalka, the gentle water nymph opera written by Dvořák, is regarded by many as the top Czech opera. This is frequently played in the National Theater of Prague.

The museum dedicated to Dvořák is situated in Villa America. This building was designed by K. I. Dientzenhofer, who was a prolific Baroque architect in Prague. This was the 1st of his works to be constructed in Prague, and it was bought in 1932 by the Dvořák Society (entry to the museum – 50CZK, Tuesday to Sunday 10:00 to 17:00, shut Monday, Ke Karlovu 20, at Praha 2, refer to page 84 of the map, telephone: 224 923 363).

A couple of other significant composers from the Czech Republic are the moderns, Janáček and Mahler. Gustav Mahler (1860 to 1911), a Jewish man from Jihlava, pioneered atonal music. His top works were Symphony Number One: The Song of the Earth and Titan, both based on the noises of the Moravian fields and woods. Leoš Janáček (1854 to 1928), possibly the most innovative but least accessible composer from the Czech lands, was inspired by language—its abrupt pauses and flow. He is renowned for his Lašské Tance (Lachian Dances) and Symphonietta, along with his opera Příhody Lišky Bystroušky (Cunning Little Vixen).

Classic Music and Opera in Prague