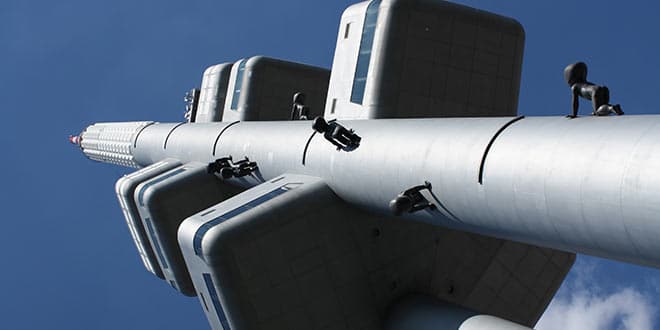 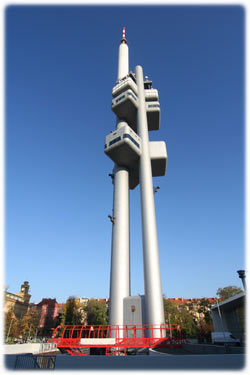 The first visitors entered the observation point of the Žižkov transmitter twenty years ago. But they began to transmit from there as early as in May 1991. Today, part is being rebuilt to become data centres, the restaurant is under reconstruction, and also the park below the tower is waiting for revitalisation.

The controversial tower, with a height of 216 metres and a weight of 2200 tons, dominant in a way which is not easy to overlook when looking at our capital city, celebrates its twentieth anniversary on 18 February. The transmitter, thanks to which inhabitants of Prague and in the surrounding area had received television and radio signals since the beginning of the nineties of the last century when the Petřín Tower stopped transmitting, and the Cukrák transmitter did not cover the whole capital city, is quite popular among inhabitants of Prague; this is rather unusual compared to the rest of the world.

The project was created under the leadership of the architect Václav Aulický and the structural designer Jiří Kozák in 1984; the foundation stone of the Žižkov tower was laid one year later. And although the aesthetic consideration was not important to the contracting authority at all, the team around Aulický took a long time over the project and designed the object suggestive of a rocket ready to start.

Many people did not like the construction at that time, and it still has its opponents. Recently the Žižkov tower was placed in the world’s top ten ugliest buildings rankings by the American CNN service, where it was in the fourth position.

But inhabitants of Prague were beautifying it over the course of years. The most marked change was when ten giant babies by the sculptor David Černý appeared on the high tubes. After the laminated toddlers were removed, the tower was equipped with new lighting.

Since 2006 the tower has been lit in the Czech national colours – red, blue and white – and this will continue. This will only be changed during the Žižkov Shrovetide Carnival when lit in green, blue and red.

Mainly the tower interior and surroundings will undergo significant changes. The new tenant is now reconstructing the restaurant, which will be extended to have three rooms. It will be open to its first customers on 1 June 2012. Further, the park below the tower will be revitalised. A playground, a mini-golf course and a beer stand should be built there, and an open stage should be built in the atrium. Also, the observation point at the 93rd metre, which has not been in ideal condition for a long time, will be reconstructed.

České Radiokomunikace, who have a new free area – 13,000 m2 in the concrete – thanks to the termination of analogue transmitting, is now quickly modernising and building the first data centre corporate customers, ICT service providers and telecommunication operators. Eleven television and eight radio stations are currently transmitting digitally from the antenna extension.

There are also mobile operator transmitters and Prague air quality measurement devices on the tower. According to České Radiokomunikace, the tower will certainly perform its function for decades despite continuously developed and modernised technologies and data transfer.