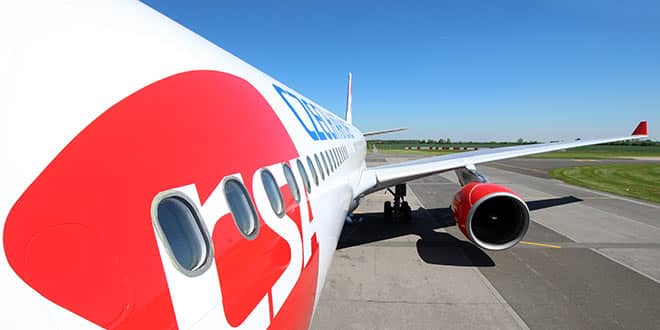 The largest airport in the Czech Republic is Prague-Ruzyně. There are smaller international airports in several other towns and cities (Ostrava, Brno and Karlovy Vary). Most flights from Czech airports are international services, as it is better to use other modes of transport for domestic travel.

Flights within the Czech Republic are mainly operated by Czech Airlines (ČSA V celnici 5, Praha 1 t. 239 007 007). There is a variety of other airlines which link Prague with Brno and Ostrava. Though not cheap, especially when compared with the train or bus, they are useful only when you want to get somewhere quickly or connecting from an International flight.

Czech Airlines operates 31 monopoly routes from Prague Airport, including three domestic routes to Brno, Ostrava and Karlovy Vary, alongside the feeding routes from Slovak cities Košice, Žilina and Bratislava. These 31 routes represent about 40% of total flights and just over 30% of total capacity. On 27 other routes, representing around 40% of flights, the airline faces direct competition from one other carrier. In comparison, on 11 major European routes (Amsterdam, Barcelona, Brussels, Copenhagen, Dublin, Madrid, Milan MXP, Paris CDG, Rome FCO, Sofia and Thessaloniki), the airline faces two competitors face-on.