Forbidden Segways Are Replaced With Electric Scooters in Prague Centers 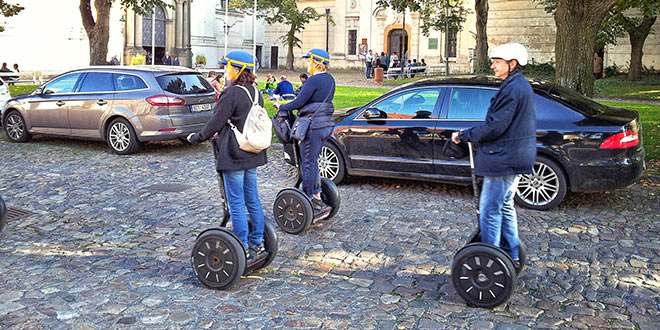 Segways had to disappear from the broader centre of Prague by the end of last year. The entrepreneurs who based their businesses on Segways are not giving up, though. They are moving their customers around by other means, for example, on electric scooters.

In particular, Prague 1 was fighting against the heavy two-wheeled Segways because tourists were riding them through crowds of pedestrians. Since November, when “No Segway” signs appeared on the streets, Prague 1 no longer has this problem. The policemen gave tickets to eleven culprits, who broke the law in mid-December.

“Big Segways practically disappeared from sidewalks,” Oldrich Lomecky (TOP 09), the mayor of the first city district, confirmed. But the forbidden machines have new successors. Some of the operators moved to electric scooters, on which they are moving the tourists through the centre again.

The situation is still far better for the city in this case than it used to be with the Segways.

The law looks at electrical scooters the same way it looks at bicycles so that the riders have to respect the same rules as cyclists. Police officers can potentially find them for riding on a sidewalk without any need for new ordinances and signs.

According to a city police spokeswoman, Irena Seifertova, the policemen noticed increasing numbers of electric scooters in the Prague centre. “The policemen solve crimes at Mala Strana, for example, where a group of scooter riders were riding on a sidewalk, which is against the transportation law,” Seifertova mentioned.

Segway as a Billboard Advertisement

She says that another coming trend is the Segway rental operator, who brings a few of the machines to the city centre and then offers his services to the tourists. “In this case, they use Segways as billboards. Later, they take the tourists to places where riding a Segway is allowed. With this, though, they can commit a transgression as well, as it can be a violation of market law, violation of the prohibition of street advertising, or unauthorized usage of public area,” the spokeswoman said.

Most of the rental companies moved to Prague 2, where Segways with customers are ridden as well. The second city district banned Segways only in certain parts.

“Prague 2 has become somehow an island because Prague 3 and 4 also joined the ban. The number of Segways was increasing substantially, and citizens were complaining about it. That is why we asked the municipal authority to broaden the area where Segways are forbidden,” says Jiri Korseska (ODS), the vice mayor of the second city district, promising that the Segway-free zone should be broadened before summer.

Owners of Segway rentals themselves are trying to fight the ordinance. The Czech Segway Association sued the ordinance, saying that the prohibition is harming their business and it is against the law (we wrote about it here).

Advertising on the Streets Without a Permit

Segway rentals opened the space for these people by leaving the centre. The problem is that these groups usually offer their services illegally – without permission to occupy a public area and without paying the mandatory fee.

“It is necessary that the trade licensing office and city police start to fight against it. It is the untaxed occupation of a public area. It is harming the service providers who pay for their space,” Lomecky explained. The situation was also discussed at the municipal authority office for safety, and the chief of city police, Eduard Suster, promised those police officers would pay more attention to illegal ride offering.

Spokesman of the Travel Agencies Association – Prague Sightseeing Tour, Ales Martin, also talked about the problem. “To prove the transgressions to providers, who do not pay any fees, is very complicated. We are trying to do it by cooperating with the city hall,” Martin said. He also agrees that the situation escalated after banning the Segways.