House At the Golden Angel 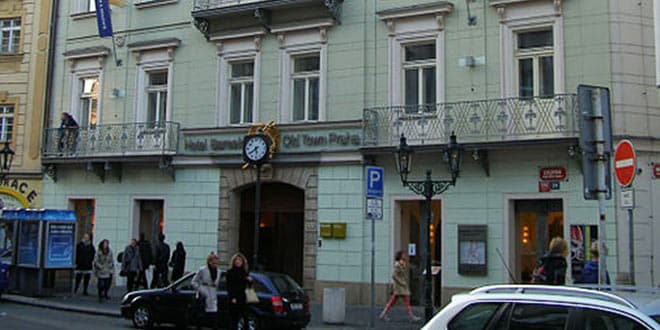 The house “At the Golden Angel” in Celetna Street (No.29/588) near Old Town Square has a colourful history. There used to be a popular coaching inn and, later, a luxury hotel for the richest Prague visitors. Many famous personalities, such as Wolfgang Amadeus Mozart, stayed in this house.

Knights Templar in the area

Five houses originally used to stand there. Knights Templar lived in the house in the Middle Ages. There are large medieval basements from that era in the house, and it is said that long-secret corridors are leading to the Church of Our Lady before Tyn. The nearby street is still called “Templova”.
W. A. Mozart in the House at the Golden Angel

The five houses were later joined together, and the coaching inn “At the new tavern” was built inside. W. A. Mozart stayed there in 1787, during his first visit to Prague.
The house “At the Golden Angel” was rebuilt in the Classicist style in 1860, and the renowned hotel “At the Golden Angel” was opened there. Among the guests were personalities such as the Danish Queen in 1862, the Greek Queen and the Russian anarchist Bakunin.

The architecture of the house

The symbol of the golden angel at the front gave the house its name. The house “At the Golden Angel” has a richly decorated front façade with several balconies, and there are glazed galleries by the courtyard. In the past, carriages and coaches with prominent guests inside used to drive into the courtyard.

The hotel “At the Golden Angel” was opened again recently. 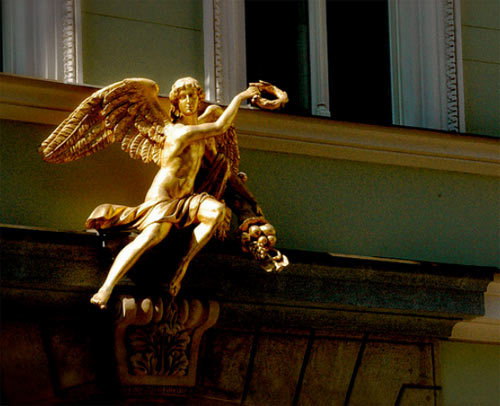