DISCOVER PRAGUE!
HomeNewsPrague Gas Lamps Are Lightened up by the Probably Tallest Lamplighter in...
News 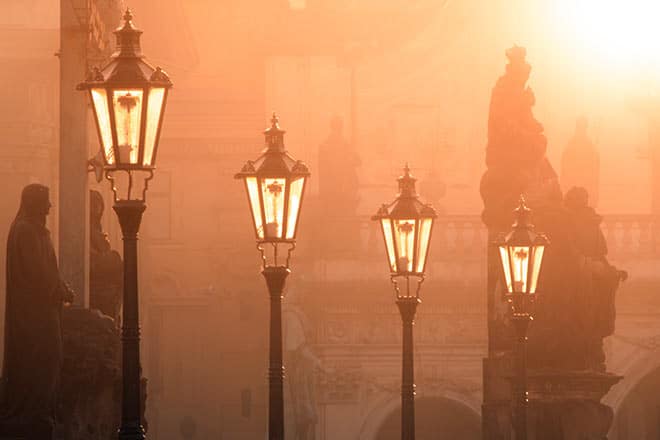 Even though the lamplighter profession doesn’t exist anymore, we can still find some enthusiasts of gaslighting. In Prague, there lives probably the tallest lamplighter in the world. At 4 pm during the advent time, Jan Žákovec appears at Charles Bridge and then lights up the lamps manually.

Stature is an important factor for lamplighters. The taller, the better. It does not need such a high beam of light. “My height is 205 centimetres; I am probably the tallest lamplighter in the world,” laughs the head of the Gas Museum.

The number of lamplighters can be counted on the fingers of one hand because today, the lamps light up automatically. “I know the lamplighters in Poland in Wroclaw, Brest in Belarus and in London … there are very few of us,” admits Žákovec with a smile.

“It is important to say that lamplighters do not come anymore. The lamps turn on automatically, but we, as gas men, are interested in restoring the tradition to show to the public how the lamps were lighted up in the past, so before Christmas, at the time of advent, the lamplighter walks every day along the Charles Bridge and shows it to tourists, people,” explains Jan Žákovec, who became a celebrity during just a second on Charles Bridge. Both tourists and Czechs want to take pictures with him, or they ask for more details.

The first 200 gas lamps were lit in Prague on September 15, 1847. The light-bearers or also the lantern keepers had originally had a long lantern bar with fire at the end. They opened the gas and, by using the bar, lit it. Later, it was automated.

Fortunately, in 2002 it was decided that this tradition belongs to Prague, and the first gas lamps were lit by the new technology – natural gas as part of the Lighting of the Royal Route project. At present, there are 700 lamps along the entire Royal Route in Prague, the historical route which the Czech kings went to the coronation. The journey started in the King’s Court in the Old Town, and the historical centre through the Charles Bridge continued to the Prague Castle to the Cathedral of St. Vít.