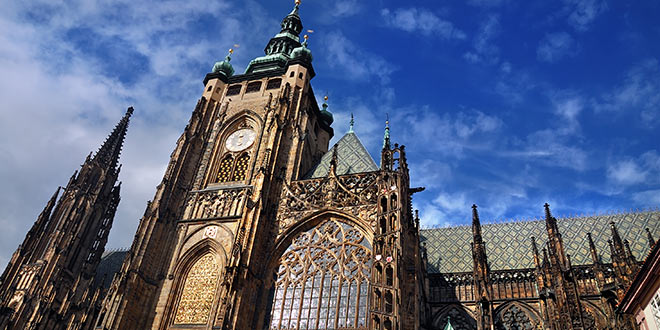 A narrow passage leads to the third courtyard of the castle, and a sudden view of the immense and awe-inspiring facade of St. Vitus Cathedral looming up just a few steps away. The cathedral can be entered through the cathedral’s western door. The spires of St. Vitus Cathedral, an elegant but domineering French Gothic structure, soar above the ramparts. It is the country’s largest church containing numerous side chapels, frescoes and tombstones: not to forget the nave’s beautiful coloured stained-glass windows (created by the famous Czech Art Nouveau artist Alfons Mucha), which literally sparkles with all the finery inside. The most beautiful of the cathedral’s numerous side chapels contains the tomb of St Wenceslas, the ‘Good King Wenceslas’ of the Christmas carol, which has become something of a pilgrimage site and shows scenes from the life of Christ. The Coronation Chamber houses the Bohemian Crown Jewels, and the Royal Crypt is where most of the Kings and Queens of Bohemia have their final place of rest (Charles IV, Wenceslas IV, George of Poděbrady and Rudolf II). The southern entrance to the cathedral, the Golden Gate, is decorated with a richly gilded coloured mosaic representing the Last Judgement, dated from 1370. It is one of the artistic treasures found in Castle District. It is possible to climb the 96m-tall tower for magnificent views over the city and clockworks. The tower’s Sigismund Bell, made in 1549, is Bohemia’s largest bell. 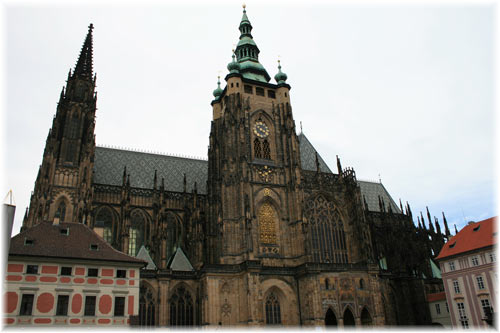 It took nearly six centuries to complete St. Vitus Cathedral. Work started on the present Gothic building in 1344, under the direction of Matthias of Arras. German Petr Parléř and his two sons were responsible for the lofty choir and the surrounding chapels, which were finally completed early in the 15th century. The tower on the south side was given its Renaissance steeple in 1562, to which baroque embellishments were later added. The nave and the impressive west end date from the second half of the 19th century. The Golden Portal (the original entrance) on the south side contains a mosaic of the Last Judgement, dating from 1370, which has been restored to its former glory. The Chapel of St Wenceslas, dating from 1358 to 1367, is one of the oldest parts of the building and the most beautifully decorated. The lower walls are encrusted with scintillating jasper and amethyst, while the frescoes (14th-16th centuries) depict scenes from the passion of Christ and the life of St Wenceslas (the saint is buried directly underneath the chapel). The foundations of the 11th-century Romanesque basilica were unearthed as the cathedral was nearing completion and can be seen in the crypt, along with the sarcophagi of the kings of Bohemia. King Vladislav Jagiello commissioned the beautiful Royal Oratory in the 1480s: the vaulted ceiling, shaped like the branches of a tree, is highly unusual. An exquisite silver funerary monument to the cult saint, John of Nepomuk, was erected in the choir in 1736. One of the cherubs points to the saint’s tongue, which was said never to have decayed. The cathedral also contains fine 20th-century stained glass, notably Alphonse Mucha’s portrait of Saints Cyril and Methodius in the third chapel from the west end. 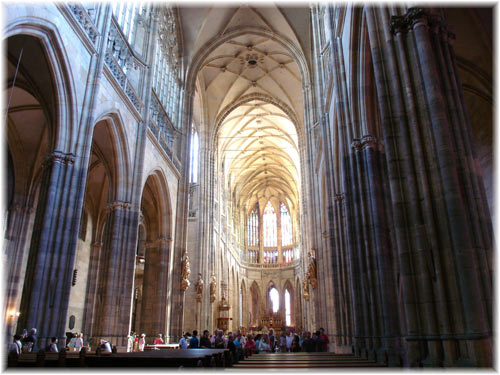 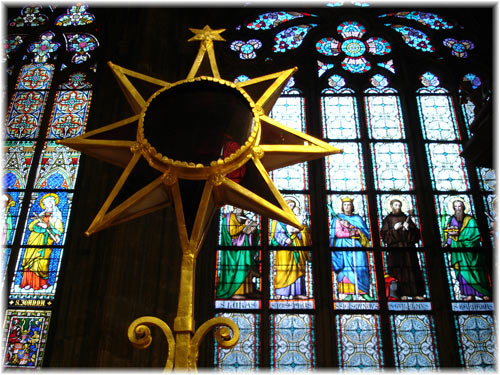