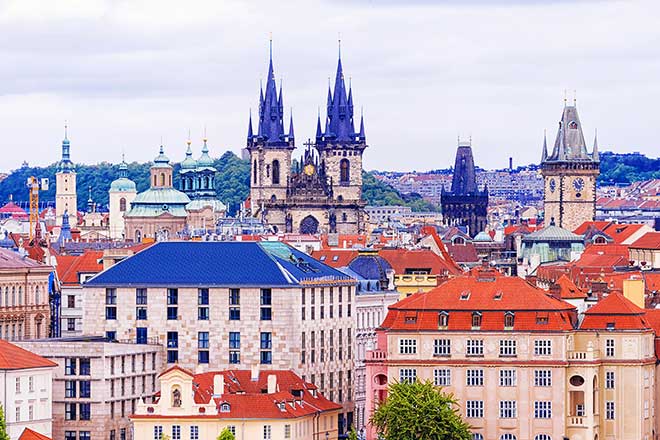 Even if you get a slightly above average salary, buying your own space in Prague is not at all easy. On a standard apartment of sixty square meters in size, the Prague residents needed roughly 12.4 average annual net yearly salaries. More expensive housing than the average salary in the city has only the residents of London and Paris.

This results from an analysis of the Institute for Strategic Investments from the Faculty of Finance and Accounting of the University of Economics, based on the Deloitte Property Index for 2017. The analysis compares the cost of buying old and new flats with salaries in fourteen European capitals.

The average bid price for an apartment in Prague’s new building is now at CZK 94,236 per square meter. “Over the last two years, the bid price is up by 40 percent due to minimal licensing processes and a lack of housing in the market. Even this year, demand is outpacing supply, and prices will continue to rise, “said a spokeswoman for the Central Group, Marcela Fialk, saying it would probably be units of a percentage.

Below Fifty Thousand, It Is Not Possible

The hot ones in the capital are not just the new buildings. The price of older apartment blocks, which are among the least popular, ranges from fifty to fifty-five thousand crowns per square meter. In better locations, they can also exceed sixty thousand.

Apartments in brick houses are sold at a minimum price of around seventy thousand crowns per square meter. But it is much more common in the case of brick flats. According to Century 21 real estate brokers, the price is between eighty and ninety thousand.

“This year, I do not expect any significant growth; it will be a maximum of one percent. It seems that now is the ideal time to sell, “said MF DNES CEO of Real Estate Network Century 21 Štěpán Gjurič a reminded that flats of less than fifty thousand crowns per square meter in Prague are virtually non-existent.

Compared to the European cities, however, prices in Prague are still about a half, sometimes even a third of the comparable prices. “For example, in Milan, prices in the historic centre range from ten to seventeen thousand euros per square meter (250-430 thousand crowns),” says Sona’s International Real Estate Director Ilona Mancikova.

The capital of the Czech Republic is slowly reaching the western metropolis, which has an impact on the availability of housing in Prague. However, according to Petr Hana of Deloitte, the real estate bubble is not present. “Buying in a bubble,” the market could be called if there were irrational situations when real estate would be bought by people who did not have enough money or would buy overpriced real estate. Banks would be more lenient in risk assessment and would disproportionately increase the availability of mortgages. Or if the rent was significantly lower than the mortgage payment. But there is no such situation in the market of today, “says Hana.

According to the banking sector, the problém is mortgages are low on interest (about 1.5 percent). The current situation is due to a lack of supply and high demand for the acquisition of ownership or investment dwellings.

Despite rising prices, Prague apartments are an interesting investment opportunity. Especially for foreigners in whose country the return on property is lower. Such an example is London, which is worse off Prague than Sotheby’s International Real Estate.

Average rents in Prague are two to three times lower than in London. However, the return on Prague rents is twice as high as in the British capital.

This is why Prague has become an interesting investment opportunity for the British, and British investments play an increasingly important role in the city. While in 2013, the British invested EUR 89 million (2.2 billion crowns) in the Czech and Central European real estate market, it was 144 million EUR in 2016.

The fact is that Prague is more attractive than most European capitals in terms of return on investment, says Ilona Mancikova. “Even luxury properties in the centre have yields below five percent. Higher yields can be expected from commercial real estate, and the highest is still the logistics. The residential area is also interesting for Czech properties outside Prague. However, they are riskier because they are not considered “austerity” and have higher volatility, “added Mancikova. Simply put, their prices are moving upwards and downwards significantly according to market interest.