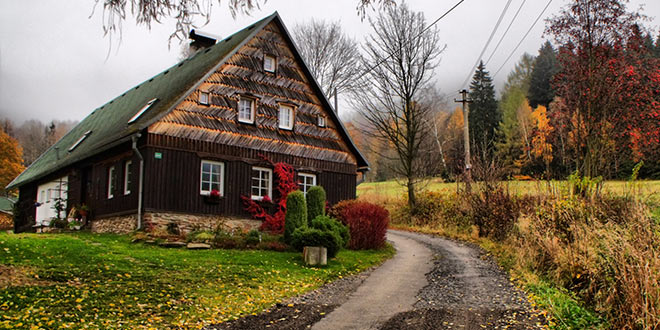 During Communist rule, it would be an understatement to say that Czech people only had restricted options for travelling. Halfway through the twentieth century, ownership of chalupas, or cottages, in the countryside became very popular amongst families. When staying in these cottages, people could speak openly, drink around the campfire and do some gardening. This tradition carries on to this day, and it is not uncommon for local people to leave Prague during summer weekends.

Czechs enjoy spending their spare time outdoors, and national past-times include camping, mushroom picking and hiking and, of course, warmer climates bring a raft of weekend travellers to the countryside to service the gardens of their much-loved cottages. Owning a weekend cottage is as synonymous with the Czech identity as well-brewed Czech beer is. Even outdoor, winter sports, such as skiing, are nationwide leisure activities. Without a doubt, the Czech Rep’s dramatic scenery of rivers, rolling hills and mountains have played a major part in its’ culture’s obsession with the natural world and has seen the rise of Arcadian folklore and myths.

A great place to rent a cottage is in the area of Beskydy. In the south-eastern area of the country, the low hills are renowned for their picturesque landscape. It is believed that this is the sole part of the Czech Republic where bear sightings have been made recently.

The Czech Republic is also a great place to go camping. Several different campsite facilities are located all around the country, lots by lakes or rivers. Many camps are operational in April. But some are not open until May, and the majority stay operational until October.

Additionally, the Czech Rep is a paradise for walkers, not just because of the enchanting mountains, forests and rivers, but also because of the number of chateaux and castles linked by the routes.

If you are searching for a place to unwind and have sufficient free time, cottages can be inexpensively hired. Visit www.interbohemia.cz or bellow listed websites:

ChataTour provides stays during the winter in vacation houses. You can see these houses in their winter stays catalogue in mountain chalets at ski slopes, cross-country skiing routes and in the mountains.  http://www.chatatour.com/en/

TourTrend provides boarding in recreational buildings in over one thousand chalets, cottages, cabins etc., in the Czech Rep & Slovakia. http://www.czechvacation.com/