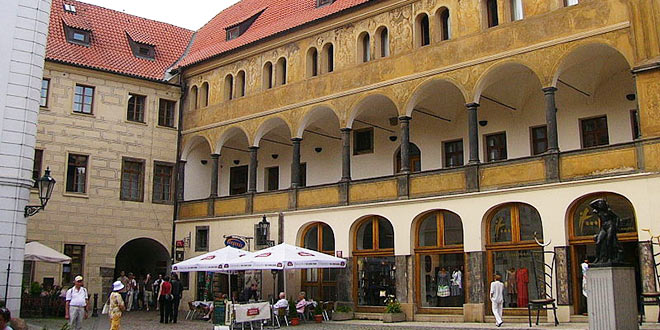 By integration of several houses arisen complex of buildings with a large courtyard where since 13th-century markets were held. Gothic and Renaissance houses offer pleasant sitting in many restaurants, bars and clubs.

Ungelt is the name of an old mercantile centre dating back to the end of the 12th century. Under Charles IV, every merchant passing through Prague had to spend several days in Ungelt. Every merchant had to submit his goods and pay duty (um Geld – Geld is German for Money, hence the name). In return, the ruler would guarantee his safety. Customs duty was paid here until the end of the 16th century. Between the years 1984 and 1996, the whole area was thoroughly renovated. Today, in this area of former inns and stables, you will find interesting arts and crafts shops selling mainly Czech goods. As in the old days, the local restaurants again entice people with delicious specialities. Sitting outside is possible from April onwards. The most important building is Granovský Palace – one of the best-preserved Renaissance jewels in Prague.

If you’re looking for something special, visit Ungelt Courtyard, behind the Tyn Church, where small shops sell wooden toys and marionettes. You can as well pick up some Art Nouveau antiques from Antique Ungelt.

Visit café and club of Restaurant Mctamorphis, a popular meeting place in the original Blue House. The house is located in the Týn Court in the Old Town’s Ungelt and is a UNESCO Heritage Site and the square as a whole. Part of the house is formed by the original east gate of the Ungelt. In the cellars on the ceiling is the original plaster dating back to 1689. 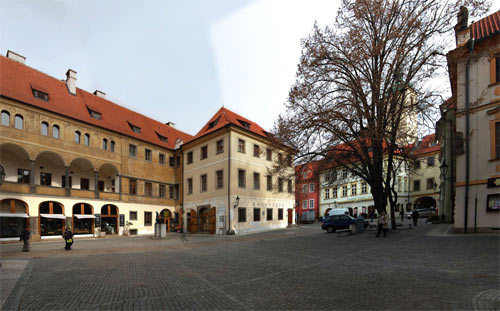