Can We Expect Russians Returning to Prague in 2016? 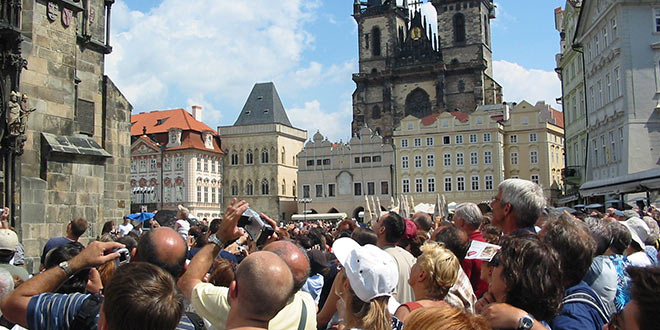 Passengers‘ interest in the Moscow – Prague airline is rising again after last year’s downturn. This is evident in the latest statistics from the Prague Airport, which were collected at the end of February 2016. Nevertheless, the hotelkeepers stay careful because the year-to-year drops in numbers of housed Russian tourists recorded just a slight increase. Improved repletion of the airplanes heading to Russia can therefore be caused by the popularity of transfers in Moscow for Czech tourists travelling to Asia.

Official data about the number of passengers who arrived in the Czech Republic in January and February will be published subsequently. However, the increasing trend is already confirmed by the statistics of the Prague Airport.

In December and January, when Russians travel to the Czech in the greatest numbers, the year-to-year interest has risen by sixteen per cent. In January, Moscow reached first place in passenger count among all destinations with airlines to Prague.

Nevertheless, hotelkeepers stay careful. “We are still one third below in comparison with other years. But in the present, we can see the Russians’ renewed and improved interest in travelling to us,” says Viliam Sivek, the owner of Sivek Hotels and president of the Travel Agencies Association.

For the first time, the Chinese spent more money in Czech than Russians, each one more than 20 thousand.

The Prague Airport eases the optimism as well. According to the spokeswoman Marika Janoušková, the only increase is in passenger count on the Prague – Moscow airline, which can be caused by the Czechs having a greater interest in flights to Asia with Aeroflot.

That is to say because the numbers also include passengers who just transfer to Moscow. “Aeroflot, according to our information, reports increases in-transit passengers, which can mean that the higher capacity is taken just by these passengers,” Janoušková concludes.

Russia was in second place among the most popular destinations on airlines from Prague, and the first one was Great Britain.

According to Jan Otava of CzechTourism, data collected in December show a year-to-year drop in numbers of housed Russian tourists by 21 per cent. It is therefore just a mild increase in the trend in comparison with last year’s drops from other months reaching over thirty per cent. “To this day, we noticed no signal preceding a change of the trend,” Otava says.

The Czech Republic Is Friendly to the Russians

Russians have been among the most desired visitors in Czech hotels for a long time, especially because they spend more and stay for the longest time on average. The numbers of Russian tourists in the Czech dropped by 260 thousand last year, which is more than one third. The main reasons were economic sanctions and the ruble weakening.

“They still perceive us as a friendly country. The drop is a great loss for hotels and the whole tourist industry, ” Sivek says. He does not expect the Russians to be replaced by the Chinese in terms of tourist amount, although there is a new charter airline from China.

“They stay here for a much shorter time,” Sivek explains. After years of limitations of the Russian airlines, there are new airlines to Russia also planned by Czech Airlines. This year they are going to launch a new airline to Kazan.

The Prague Airport’s statistics for this year’s first two months prove that the development of air transport keeps continuing and the year-to-year amount of passengers has risen by nearly 13 per cent.