DISCOVER PRAGUE!
HomeNewsDo Not Drink Alcohol on the Street, Do Not Disturb at Night....
News

Do Not Drink Alcohol on the Street, Do Not Disturb at Night. Prague Is Trying to Calm the Tourists Down 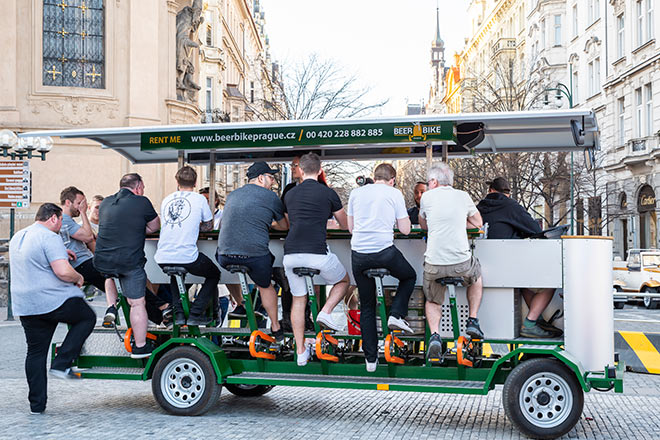 Night hours, no alcohol consumption on the street and being considerate to the surroundings. These three rules were included in Prague´s campaign targeting tourists. They often do not even know about the bans. As of next week, posters in bars or on the street will warn of compliance with the rules for fines of up to € 400.

“There are night hours after ten o’clock in Prague, and drinking alcohol on the street is forbidden at selected locations. Tourists come to Dlouhá třída and can get the impression that it is a party zone. They do not realize that someone lives there,” said Jan Stern, who, as a” night mayor”, oversees the regulation of nightlife in the capital.

The rules on posters are described in English and information about a fine for their violation. “We are in the phase of selecting the areas where the campaign will run. Our goal is the centre, Náplavka, Dlouhá street, and Prague´s entry points – the main railway station or bus number 119, which arrive from the airport. Tourists will then see the campaign when entering the city,” Stern explains.

The night mayor also deals with private businesses, which tourists often visit. “The posters could be placed on bulletin boards or at the toilets. We want the message to be seen all around. We will move online as well,” states Štern.

The three rules campaign will serve as a test and will eventually be expanded if appropriate. “The goal is not to get as many tourists to the city as possible, but rather to tackle the negative impacts that tourism has on Prague residents,” he added. The campaign will cost about 400,000.

The campaign could also help to make tourists return to Prague. “Thirty percent of foreign visitors are coming back to Prague, and the rest visits Prague for the first time and the last time,” said Prague City Tourism Director Petr Slepička.

A questionnaire survey has been conducted since mid-July to target the campaign more effectively. “Inquiries are taking place in the streets in the evening, specifically from seven to one. We are researching at times when entertainment can be annoying. We are learning of the structure of the visitors and their position on rules,” states Gabriele Šamanová, STEM/MARK representative. The survey will last until the end of the holiday season, and a final report will be completed by the middle of September.

According to the night mayor, the results of the survey will make it easier to target other campaigns. “We do not want to throw all the responsibility to the city police, and we know how difficult it is. There is a lot of tourists. We try to react to problems, but also to prevent them,” he added.

Other major European cities, such as Amsterdam, have problems with tourists as well. It has started with a similar campaign first, targeting the British. However, according to the survey, the Dutch themselves did not know the rules either. “We do not hide the fact that other cities have inspired us. It is a topic that is increasingly up-to-date. It is a good thing that we will address it,” concludes Stern.