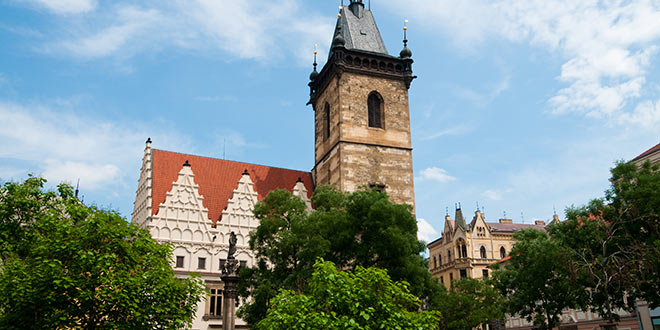 The first mention of the New Town Hall in Charles Square dates back to 1377, but not much is left of the building. Several parts were added at the beginning of the 15th century, the most noticeable one being the high tower with a big bell and a chapel inside. The wing facing Charles Square used to contain conference rooms, the wing to the Vodickova Street offices and a prison. 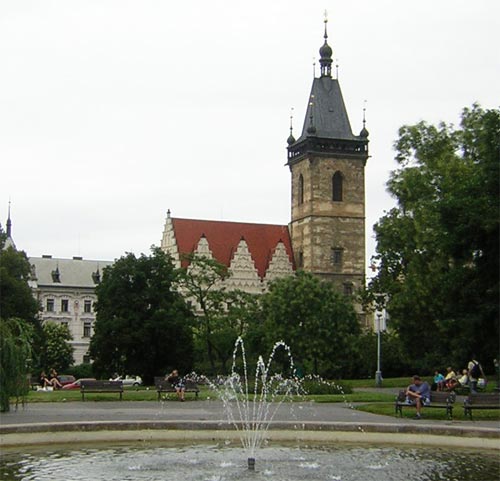 The New Town Hall served its original purpose as a seat of the municipal administration until 1784 when Emperor Josef II decided to connect the four Prague towns – the Old Town, the Lesser Town, Hradcany and the New Town – into one with one town council. After that, the New Town Hall was adjusted and turned into a criminal courthouse and a prison with a torture chamber. Many people, especially revolutionaries, were kept here.

The appearance of the building changed rapidly in the 16th century. The south wing was rebuilt in Renaissance style and was decorated with high gables. You can see a piece of chain that is fixed to the building, which is from the times when the Prague streets were closed off by chains.

The New Town Hall became very famous for the event which took place in the 15th century. On 30th July 1419, a crowd of demonstrators led by Jan Zelivsky demanded that several of Jan Hus’s followers be released from the prison. When the councillors refused to release the prisoners, the outraged crowd burst into the building and threw the councillors who were present out of the windows. The councillors who survived the fall were beaten to death. This event brought about the first Prague defenestration and started the Hussite movement, asking for reforms in the Catholic Church.

The New Town Hall is a national cultural heritage. It is used for many cultural and social events, including wedding ceremonies.