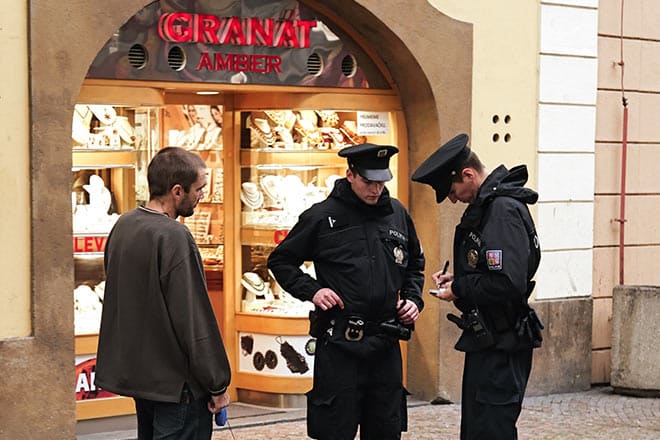 The capital city is full of traps and crooks waiting for unsuspecting tourists and distracted Czechs. That is at least how Janek Rubeš sees it. He has been bringing attention to such dangers in the streets of Prague and advising on where to catch a taxi, where to go for a beer for less than 90 crowns, and where to find an exchange office that won´t cheat you out of money.

“Helping tourists doesn´t have to be complicated. It can take only a few seconds. For example, if we took down the signs pointing to the taxi crooks on the Main Train Station, hundreds of tourists would save their money daily,” Janek Rubeš told the Metro magazine.

What did the last crook you cough on camera in the streets look like?

I don´t know if he was the last one, but we recently saw one that looked just like you and me. Only he was a chimaera that I had only heard about before that. We caught a real illegal currency street seller before the exchange office on Old Town Square. He was arrested by the police later.

Haven´t those died out yet?

He managed to steal 300 euros from a beautiful French girl before selling her worthless Belarusian rubles. Ironically, he seemed like a nice man to her. Unlike the exchange office that buys out euros for an alarming 15 crowns, which seems like usury to me, he offered to give her 27. But the writing on the bills was in the Russian alphabet. And don´t get me started on the exchange offices where they charge foreigners a 30% fee. There are about forty of them around Prague.

How is it possible that these swindlers succeed with tourists?

Different countries, different customs. We´re often the only European tourist stop where a different currency than the euro is used. You easily lose touch as a tourist. That is why we started our show called Honest Guide, where we give people advice on handling situations that seem completely ordinary to Czechs – for example buying a tram ticket or whether to tip or not.

They should, but they don´t. They are trying to embellish what Prague is like, which seems illogical to me. They don´t tell you that when you arrive at the Main Train Station, you shouldn´t get a taxi because they´re going to overcharge you and that you walk a couple of meters instead. Or that you shouldn´t take the so-called hop-on-hop-off buses for tourists, because all you´ll experience is being stuck in traffic and you won´t get to enjoy the city. We do tell them this and also provide better alternatives.

So do you think info centres should get their own versions of Janek Rubeš?

There´s no need for them to get anything like that. There are people with great language and communication skills sitting there. But they should come out of their booths from time to time and actively offer their help.

Prague has set up signs warning about taxi crooks. What do you think about that?

I´m a fan, even though it´s hard to say how effective they´ll be. But the fact that we´re admitting that there is a problem alone makes me like them. For example, at a festival in the Netherlands, you´ll see signs that the drugs you can buy off people at the festival could kill you. But they´ll also test them for you. They admit there´s a problem, and they offer a partial solution. We´re only just taking the first step.

On my wanderings through the city, I´ve discovered many places even Praguers don’t know about…

There are many of them. When I first visited the Scout Institute on the Old Town Square, I was shocked to get a 20-crown tea only 50 meters from the Astronomical Clock. Or a great soup diner of homeless cooks in Prague 5. Anything can be an experience, but we have to get tourists to go outside the city centre. Did you know that the National Gallery isn´t on the Prague city centre map, and Vyšehrad looks like it was on the periphery?

How would you deal with dishonest taxi drivers?

I would get rid of them on the Main Train Station, both on the south and north. I wonder why people think having them there is necessary. The taxi driver then drives the tourist three hundred meters and charges 29 euros at least. No one warns the tourist that the short drive isn´t worth it, so he ends up pointlessly losing his money.

What Prague issue are you going to expose with your team now?

Definitely, the hop-on-hop-off busses that I´ve already mentioned. When the weather is nice, a huge number of them turn up in the centre. As a Prague citizen, have you ever taken the bus around the city centre? So why should tourists do so? Recently, tram line 23 was introduced. The line is great for tourists and unlike tourist buses; it only costs a euro or a couple of euros for the whole day. Hop-on hop-off buses cost around twenty dollars, and you spend the whole time being stuck in traffic.

Do you ever encourage tourists to take a trip outside of the metropolis?

I have advised that to people many times. A great example of that is taking a trip to Kutná Hora. Tourists come up to booths in the centre and buy a trip for 1,200 crowns instead of coming to the Main Train Station, buying a ticket and enjoying the trip for a tiny bit of the price. My friend and I have taken a similar trip for 30 euros, including the entrance fees and food.

What do you think about the electric boards in the centre that recently replaced the banned segways?

I think that the ban and ugly signs did Prague more harm than operating similar electric vehicles did before altogether. Before, they had a speed limit and were supposed to follow the rules, but I never saw a police officer or a guard give anyone a ticket or a warning. Blanket bans and signs – that is the solution the city chose to fix the problem.