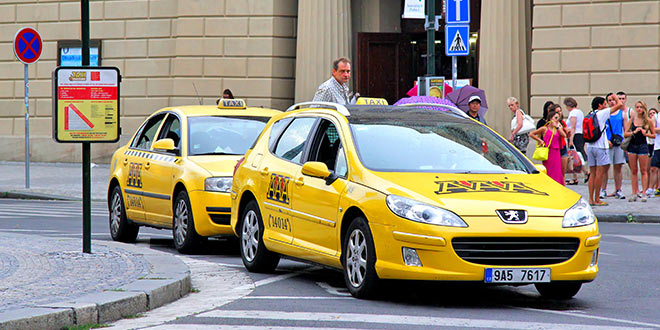 The editors of the newspaper MF DNES, along with magistrate officials, conducted checks of taxi drivers on 26 January 2016 at night. Eleven out of the fifteen tested drivers cheated.

At first glance, it seems that the situation in Prague is getting worse instead of improving despite all the different taxi service regulations. During the checks on 3 November 2015, the magistrate officials found that more than a third of the taxi drivers in Prague overcharged the fare. They revealed excessively high prices for six of the sixteen drivers checked. It was, therefore, less than during these checks.

On Pařížská St., the MF Dnes team got into a yellow Škody Superb. „We are staying at this hotel, could you take us there? “They are being taken to Hotel Aladin in Vršovice. There, one of the five patrols of the magistrate and the police are waiting, who are deployed around Prague during the test.

“According to the magistrate officials and us, he has everything in good order. Unexpectedly, however, you came across an honest man, “the police tell us, a bit puzzled, who checked a total of fifteen cars by the end of that night.

The driver of this car was one of the four the magistrate was not going to investigate. The remaining eleven offended. Nine drivers charged their customers a higher rate than they should. Furthermore, ten of them violated other rules as well. For example, they didn’t have the ride records, they did not have the taximeter in order, or they did not even turn it on at the beginning of the ride.

Right at the beginning of the check, the second driver whom the police and officials stopped walked off nearby with his phone: he called his friend, a lawyer, and then confided in us with his concerns that he may have “accidentally” charged the clients a few dozen crowns more than he should have. Not even the magistrate officials are sure about this, so they decide to launch an investigation.

“At the magistrate, we will recalculate to see if the price and mileage correspond to the reality. We will then proceed according to that. Otherwise, the driver has everything in order, “said one of the officials.

The Driver Did Not Give Change for a Five Hundred Crown Bill and Considered It to Be a Tip.

The third crew of planted customers arrives on the spot. The driver of the silver Renault charged them CZK 350. When they didn’t have a change, he suggested another way – to go to an ATM to change some money. The planted customers refused and let him have the whole five hundred crown bill. Instead of printing a document from the taximeter, they got a paper receipt on which the driver wrote CZK 500 with a pen.

A few minutes later, he was already making excuses to the officers: “No, I did not have a ride. The last time I drove a customer was the day before yesterday, “he claimed. “And who were you dropping off in front of the hotel just now?” asked the inspector. „An acquaintance,“ replied the taxi driver. “And he did not pay anything?” “No,” he says, trying to deny the last ride.

The officials gradually figure out that is not the first ride of which the driver does not have a record. Yet, he tries to make all sorts of excuses. First, he claims that he does not know how to operate the taximeter. He then claims that it is not working. After he learns that the passengers were planted, he returns the 500 crowns he had just “earned” to the inspectors.

When the police officers inform him that if he does not pay a bail of ten thousand crowns on the spot for his offences, the city police will come and put a boot on his car, he starts to claim that the car is registered on his mother’s name. However, the police officers do not care about that: he must park the car away with the help of the police officers until he pays the sum. “The police choose to proceed thus when based on previous experience, they suspect that there will be trouble with the given taxi service or driver during an investigation,” the officials explain.

The company MBM Taxi, under which the driver rides, allegedly has bad experiences with. The company has allegedly already failed to respond to their prompts in the past.

The number of taxi driver checks is growing. Last year, officials checked around 1,500 taxi drivers, i.e. two hundred more than in 2014. Other checks were carried out by patrolman and police officers. According to them, the situation has improved over the past five years, and drivers take heed of the regulations more.

According to Mayor Adriana Krnáčová, the city has no intention of letting up on the checks and is working intensively on further measures that will make life less pleasant for dishonest taxi drivers. These measures will make the conditions stricter for anyone who will want to be a taxi driver. The magistrate is also considering the option of prohibiting taxi drivers from waiting for customers on Pařížská Street. It is there that the dishonest drivers are concentrated, according to the representatives of the capital city.

In Prague, there is an excessive amount of taxi drivers. According to the magistrate, six thousand of them drive around the city while half would suffice. “There are many of us and few of them,” was the accurate comment on the supply and demand by one of the checked taxi drivers just before the police parked his car away. The team of taxi police and magistrate officials that conduct the checks only consists of up to around ten people. Therefore, the taxi drivers offend because they know that it is more of an accident if they get checked, rather than it being something they should really be worried about.