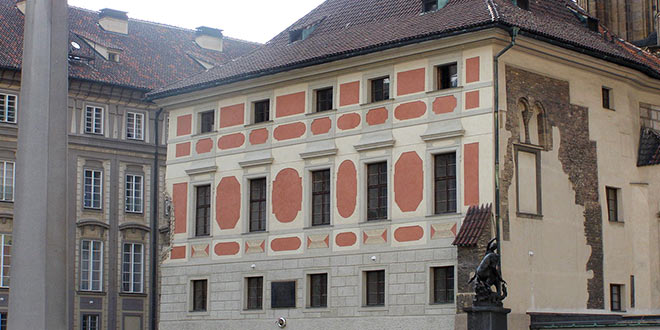 You can see the Old Provosty, the former seat of the Prague bishops, by the south-western corner of St. Vitus Cathedral at the Prague Castle. The bishop residence was already there in the 11th century, and there are the remains of the huge former Romanesque palace kept there.

Remains of the Romanesque palace

Originally, the bishop residence was a simple stone house. It used to stand on a raised place before the ground was modified in the 14th century. Also, St. Maurice Chapel used to stand there, and you can see its grounds kept by the Old Provosty. The chapel was demolished in the 19th century.

The original building of the Provosty burned down in 1142. A large Romanesque palace was built in its place, and there are still some remains of its walls in the present building.
After the bishops moved to the Bishop Court in the Lesser Town, the Old Provosty became a seat of the St. Vitus Cathedral chapter.

St. Wenceslas statue on the corner

The Old Provosty was modified several times over the centuries, and it finally got its present Baroque appearance at the beginning of the 18th century. However, the statue of St. Wenceslas on the corner of the building is older – it dates back to 1662 and is made by the important Prague Baroque sculptor Johann Georg Bendl.

The Old Provosty was in danger in the 19th century. When the architects planned the completion of St. Vitus Cathedral, they considered demolishing the Old Provosty. Fortunately, architect K. Hilbert persuaded his colleagues that the house should be saved. 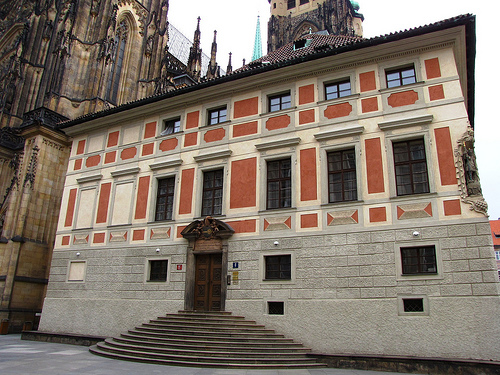