The Revolution in Public Transport? Take a Ride on the Wagon of Love! 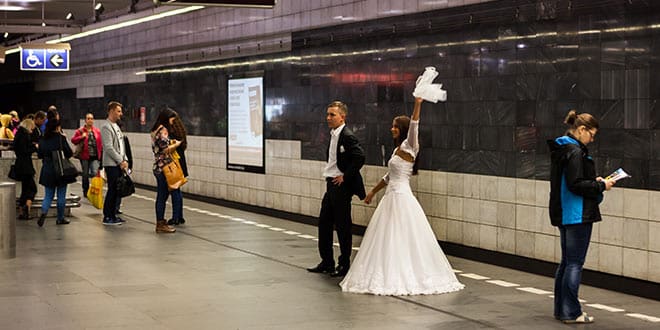 Prague subway has already experienced everything. Misbehaviour, abuse, aggression and brutal brawls… But instead of this, lovers dominate public transport! Take a ride on the wagon of love; the Transport Company invites passengers. What does it look like?

I must admit that “a wagon of love” is just a nickname for our work. In fact, it is a project named “Communication wagon”. The Prague Transport Company thought it up as a service for those who have problems dating and making new relationships. You maybe even belong to the people who say – where can I meet someone interesting without having to go to a noisy disco with alcohol and smoke odours, or on some dating site?

Maybe it is a good idea, but implementation lags significantly behind. And it wasn’t about a hit by Cupid’s arrow. The first day of this project was a disaster for other reasons. The middle wagon on line A was more crowded, but passengers were not aware that they were in a place intended for dating!

“Dating wagon? I had no idea!” That was the typical response to reporters’ questions. And there were also curious situations. “I do not know why I should get to know someone. I think I have enough friends. I choose friends in an environment other than the subway,” one of the elderly passengers commented laconically about this “innovative” project. “Goodness! Give me rest; I am eighty-four years old; I do not want dating anymore,” laughed one of the senior passengers.

The event was yet to be repeated every Saturday in the middle wagon on line A, or the green line, for oriented rather by colours. If someone really succeeds in meeting someone, it’s written in the stars.