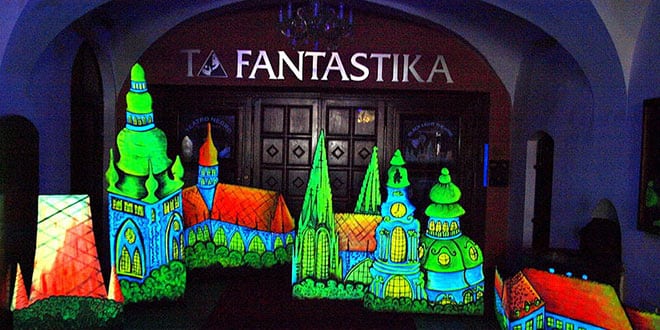 Black Light Theatre was established in New York in 1981 by Petr Kratochvil. After the Velvet Revolution, the company moved to Prague, where it enjoyed immediate success. From 1993 TA FANTASTIKA would continue to perform in UNITARIA Palace in Karlova Street.

TA FANTASTIKA was also successful abroad and in the space of a few short years has been travelling almost worldwide. In contrast to other black light theatres, the repertoire was always based on big, classic novels such as Baron Munchausen, Don Quixote, Alice in Wonderland, and Gulliver’s Travels.

These famous literary works are, however, presented non-verbally by the theatre. The only language is movement, music, black light theatre effects, mechanical tricks, puppets and, most importantly, large-screen projections which communicate with the work of the actors … A creative, visual world, space for the imagination and the poetry of the magic lantern – all this make up the world of TA FANTASTIKA Theatre. These approaches, which mean that the performances are understandable and free of language barriers, make the shows so successful and requested throughout the world. For example, Aspects of Alice in Wonderland started nine years ago and has run for almost three thousand performances in thirty countries on three continents. The newest premiere in June 1998 – Gulliver – has the same ambition. Immediately after it began, it was requested and performed in many European countries.