DISCOVER PRAGUE!
HomeNewsCzech Tourism: We Want the Tourists in Prague to Slow Down
News

Czech Tourism: We Want the Tourists in Prague to Slow Down 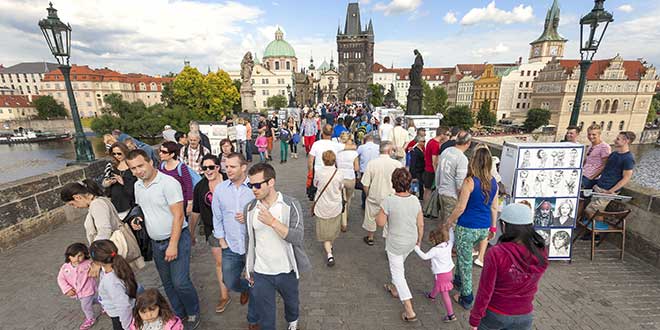 Tourists like that the metropolis is liberal and, perhaps surprisingly, they feel safe here. But sometimes, they feel unwanted. These findings emerged from a questionnaire survey organized by Prague City Tourism. “The fact that Prague has now been experiencing a huge boom in tourism is great, but we must not rest on our laurels,” says the spokesman for the organization Kateřina Bártová.

What did the survey show?

For example, the fact that most people come here individually, without travel agents, on the advice of their acquaintances. So it is important to us that the tourists enjoy it here because then they will share their experience and attract more visitors.

It is surprising, I would say, that most people get their information from the internet.

This, of course, too, but the initial impulse comes from loved ones. 45 percent of those surveyed expressed such feelings in winter, and 43 percent of respondents did so in summer.

Why do tourists come here?

The main reasons are architecture, history and sights. In the second place, but with considerable hindsight, is gastronomy and entertainment. We want tourists to come because of other things as well as ancient architecture. We have interesting cultural offers and gastronomy.

So there are already tourists coming because of the food? Whereabout?

For example, Vinohrady enjoys varied gastronomy and have things to offer. Karlín is also popular for food places; the floods of 2002 paradoxically helped, and now Karlín is being talked about like a quarter, similar to Kreuzberg in Berlin. But it is also interesting for its new buildings, which unfortunately are not being built in Prague as much as we would like.

After all, you said that there are more tourists as well due to the sights, so why do you want to have new construction?

We should not keep relying on the preserved architecture. The city is a changing element. Tourists who come here for the first time, of course, want to see the Charles Bridge, Prague Castle. But when they visit these relics, why should they come back? It is important that there is always something happening here so people would like to spend a longer period of time than just one or two nights. There are many great events; each year, we attract the Signal festival, the United Islands festival, Summer Letná or Marathon, but it would be good to invent something that is nowhere else in Europe because that would make it worthwhile coming here.

For example, the fact that Prague is liberal in certain respects. They are also satisfied with public transport, the services of information centres, and professional guides’ work.

Sometimes they feel unwanted. This applies to services. They believe, for example, that the employees at hotel receptions do not behave towards them in a way they would like. Tourism is also about working with people, which is not always easy.

Prague City Tourism recently stated that the centre is overcrowded, and is therefore trying to direct the tourists to the other parts. How do you do this?

More and more people are coming to Prague, and it is not possible to inflate the city. Therefore we are trying to show that Prague is not only a historical centre, but there is much more here to see. This year, for example, we have issued a booklet of five walks in Prague, which invites visitors to lesser-known corners of Prague.

Prague City Tourism staff are already spending their second year asking tourists why they visit Prague or if they want to come back. The questionnaire survey is always done by the municipal organization in winter and summer and is intended to market the tourist Prague.

So far, 6161 respondents have answered. Each nationality is always represented by a maximum of 120 people older than 15 years. The questionnaires are in 12 languages, and already 113 nationalities have expressed themselves in them.

And how is it going so far with redirecting the tourists away from the city centre?

It’s running for the long haul. Three-quarters of the tourists are here for the first time, and of course, they are not going to miss the main relics. On the other hand, the question arises whether Prague is able to accommodate more tourists.

The numbers confirm that Prague is popular. In the first half of this year, we recorded an increase in tourist numbers of 6.7 percent. How do you explain their interest?

We systematically promote Prague; in addition, urban tourism is on the rise. People from Europe, where most of the tourists come from, like to split their free time into shorter vacations. It is also easily accessible and has a good location.

Do tourists like it also because they feel safe here, as is shown from the questionnaires?

Yes, safety and cleanliness are two aspects that tourists value the most.

This is ironic due to the fact that the European Commission has released a ranking of the Regional Index of Social Development in the EU, according to which the security we have is lagging behind.

It depends on the criteria on which the European Commission works. It may also include ailments that every big city has – pickpockets, problematic night locations. We ask the people if overall they feel safe here, and the satisfaction in this area exceeds 90 percent.

There are more Europeans than Asians. Are you interested at all in being promoted in Asia even though, as you say, there are already enough tourists?

We must not rest on our laurels. Prague is now experiencing a huge boom in tourism, but the competition is huge, and Asia is very important to us. Their way of travelling is different from the European way, though.

When Asians are travelling to Europe, they don’t want to see only Prague. Therefore they stay here for a short period, and we would like them to stay longer. We will be more accentuating the trend of slow tourism. That is in contrast to arriving somewhere, nipping in, tick what you “should” see on your list, and then heading elsewhere. Quite the reverse; we want them to enjoy their travelling experience adequately and not in a hurry.

So you’re trying to slow down the tourists?

Yes, that would be great, but this cannot be achieved in one day.

What other trends in the tourism industry do we have here?

Film tourism has great potential. Last year we even released a film map which currently shows 39 shooting locations. The story of the film Anthropoid, for example, takes place in Prague, and we hope that it will attract film fans. The capital city also founded a movie foundation that will support filmmakers interested in filming in Prague.

What else shows Prague in a good light?

Prague is, for example, increasingly appearing in computer games. The question is, to what extent will the player feel the need to visit rather than to prioritize the virtual experience. Then it also helps when a celebrity shows up here. Zac Efron was here in summer; his female fans registered him on Charles Bridge and flooded Instagram.

Share
Facebook
Twitter
Pinterest
Email
Print
Previous articlePrague Will Try to Speed up Public Transport; Reserved Lanes and Priorities at Traffic Lights Will Be Added
Next articleFerris Wheel in Prague: See the Town From the Luxurious Cabins at a Height of 60 Metres
RELATED ARTICLES
News