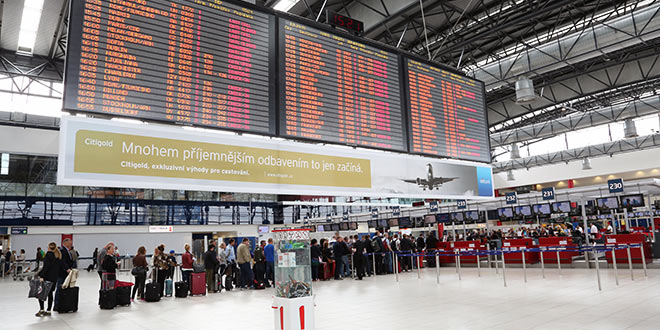 In 2011 a total of 11,788,629 passengers passed through Prague Airport in Ruzyne, which represented an increase of two percent compared with the previous year, according to the operational results which the company published on Thursday.

Prague Airport achieved this result even though its largest trading partner, Czech Airlines (ČSA), underwent a restructuring process. At the same time, interest in charter transport has also decreased slightly. Aircraft are more occupied because the increase in passengers compared with the previous year occurred even despite a decrease in movements by 3.4 percent.

The strongest month in terms of traffic was July, with 1,324,531 passengers. The highest number of people a day, i.e. 49,169 passengers, was checked in by Prague Airport on 1 July. 32,298 passengers
a day on average passed through the airport.

In the course of 2011, 49 transporters were flying on regular lines from Prague to 132 destinations in total.

In 2011 regular transport accounted for 88.7 percent of the total volume of transport. 66.4 percent of passengers in total flew with network airlines, 22.2 percent flew with low-cost transporters, and 11.2 percent with charter companies.

It is clear from regular surveys prepared for Prague Airport by the agency STEM/Mark that the interest of the Czechs in air transport from Prague increased by 2.6 percent compared with the previous year (the total portion of Czechs was 33 %). After the Czechs, Prague Ruzyne Airport was used most frequently by Russians (11.2 %), followed by French (5.4 %), Americans (4.2 %), and British (4 %).

Women fly from Prague more frequently, with a proportion of 53.5 percent. One-third of passengers are peoples in the age group 25-34, and a quarter is aged 35-44. It is interesting that an entire fifth of passengers flies from Prague 3-5 times a year, with 72 percent of people using air transport for private reasons and the others for business trips.