People Keep Getting Lost in Prague and Brno 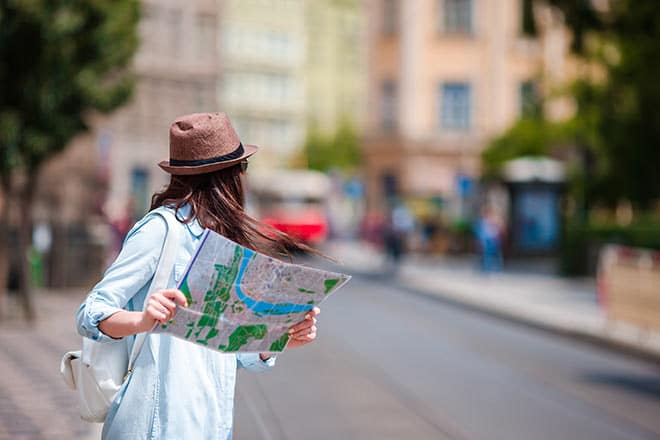 Foreigner, don’t come to Prague and Brno without a map and a guide book! Almost thirty years from the collapse of the border between the West and the East, directional signs are still mostly in Czech. Brno plans on changing that by the end of the year. Prague will hopefully get a new navigation system in two years.

The metropolis is working on a big project that will work on a complex solution for the navigation system. That means it will deal with public transport as well as interesting tourist attractions. They’re seeking inspiration, for example, in London.

A study is being prepared to define the current system and show what’s wrong with it, what people are missing, and what needs to be changed or added. Only after that will a contest be held for the design of new direction signs. “We know where the problem is, but we want to get verification by independent opinions,” stated Filip Drápal, spokesman of the Ropid company, which organizes public transport in Prague and its surroundings.

Aside from Ropid, the workgroup preparing the project includes representatives from the Prague Institute of Planning and Development, The Public Transport Company and Prague City Tourism. According to Drápal, one of the problems is that transfers between different types of public transport are marked very poorly, so are metro entrances.

“It bothers us that some direction signs are only in Czech. We need tourists to spread all over Prague. When there’s lack of pedestrian navigation, people try very few routes and crowd in the centre.”

The project’s goal is to motivate the public to walk on foot, ride bikes or use public transport.

Tourist direction signs in the centre of the Moravian metropolis, a monument zone, will be changed completely. The Tourist Information Center (TIC) of Brno will add new signs to show travellers how to monuments and have the current ones modified.

New direction signs will lead tourists, for example, to the former 10-Z civil defence shelter, which was built into the hill below the Český Šternberk castle, the Mitrovský Villa or the new information centre in the Panenská street, the spokeswoman of TIC Adéla Nováková informed Právo, adding that they were looking for a contractor for the project.

The costs have not been calculated yet; the project should be finished by the end of the year. The current directional signs are in Czech on one side and in English on the other. In the future, they will be double-sided as well. The signs will be in both languages on either side, so that tourists don’t have to look for the right side because of the language barrier, as currently.

In the Czech Republic, it has mostly been smaller towns that have been flexible. For example, the leadership of the Žatec town hall is preparing new tourist signs that will point visitors to attractive spots in the historical centre.

“The initial information system is outdated. The new system will also include voice guides. Visitors from foreign countries will be able to choose from three languages available on the audio guides,” stated the Mayor of the town, Zdeňka Hamousová (from the political party VPM). The subsidized project is also focusing on Žatec visitors with visual impairment.

A description of the historical core of the town will be available to them in Braille. They will borrow it from any of the three information centres into town – in the town hall, the malt house, and in the Hop and Beer Temple.

In Štemberk in the Olomouc region, directions have been made easier for visitors at the beginning of July by a newly installed information system intended mostly for pedestrians. “Its main purpose is to navigate visitors and lead them to attractive and tourist targets in the town,” said the spokeswoman of the Šternberk town hall, Irena Černocká.

Individual stations have directions signs placed on separate columns. The signs include the names of tourist spots in Czech and English, a pictogram, an arrow, and an approximate distance in meters.

The most significant changes that focused mainly on tourists took place in Plzeň around 2015 when the West Bohemian metropolis became the European Capital of Culture.

In Kutná Hora, a popular tourist spot, there are several navigation systems. Some are in English, and others are not.

“There are more systems because they were created as part of different projects. There will be a revision in 2018 that should unify the navigation signs and systems. The main monuments and the most important spots should become available in English as well,” confirmed the head of the department of tourism at the Kutná Hora town hall, Eliška Tivodarová.

Share
Facebook
Twitter
Pinterest
Email
Print
Previous articleParking Zones in Prague 5, 6 and 8 Will Be Expanded by the End of August 2017
Next articleThe Cheapest Tourist Metropolis in Europe? Yes, That Is Prague
RELATED ARTICLES
News