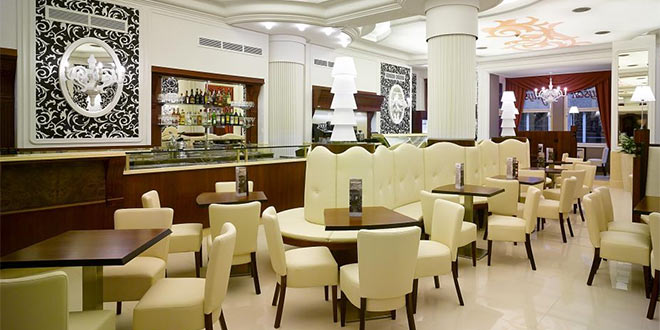 The Mysak Gallery is a house of sweet delight with the air of times long gone, still very much in demand. After Erhartova cukrarna on Letna and Paukert delicatessen on Narodni trida it is another café with sweets, served with style.

The original premises met its fate when the building, being in a terrible shape, collapsed in 2006. It took almost three years to restore this legendary sweet shop to its actual look. The doors, but especially the stucco reliefs, were carefully and professionally removed and renovated, after which they were returned to their original places. The mosaics on the floor are original, the marble staircase and wooden alcoves are also from the original building. One would say it is a masterpiece – and the place seems not to have lost its spirit.

The new owners said about the premises: “After many years break, the most famous sweet shop of the First Republic has opened again. For example, the cakes made there were tried by actors Oldrich Novy and Adina Mandlova and the president T.G. Masaryk. Witnesses nostalgically recall especially the eminent Karamel cup, which is being sold again.”

Mysak Gallery, the sweet shop, can be found right next to the Wenceslas Square, in Vodickova Street 31 (Gallery Myšák), Prague 1. website.

Delicacies from all around the world and well-tried recipes that during the First Republic attracted such stars as Hugo Haas and Adina Mandlova offer the newly re-opened delicacies shop of Jan Paukert. The history of the famous shop goes back to 1916 when it was founded by Jan and Stepanka Paukert.

Czechoslovakia has seen many battles since that time, and many things have changed, but at least some good things are rooted so deep they are hard to destroy. The founders’ son came back to the very shop and participated in the re-opening, even though he has already celebrated his 90th birthday.

In 1938 the father and son Paukert hid a treasure before Hitler. They walled up one thousand two hundred bottles of the best cognacs and liqueurs. Those survived not only Hitler but also remained hidden from the communists, and a part of the collection can also be bought in the very shop. The value of the collection is almost incalculable.

Located in the Letna Park area of Prague, the Erhart Café stands in a historic building dating from 1937 and is one of the best sweet shops in town.

The selection isn’t massive, but I think there is something for everyone. It’s all freshly made right there, and it looks and tastes delicious. They create custom-made cakes, and the head ‘chef’ is really very skilful. I’ve had some cakes made there and not only were they yummy, but they also looked fantastic. Right now, they also take orders for the typical Czech Christmas pastries and cookies. I ordered some last year, and they were amazing! We are definitely ordering some more this year! 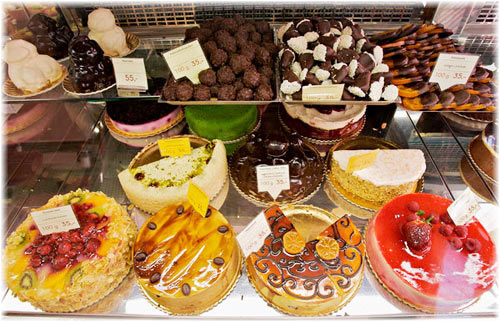