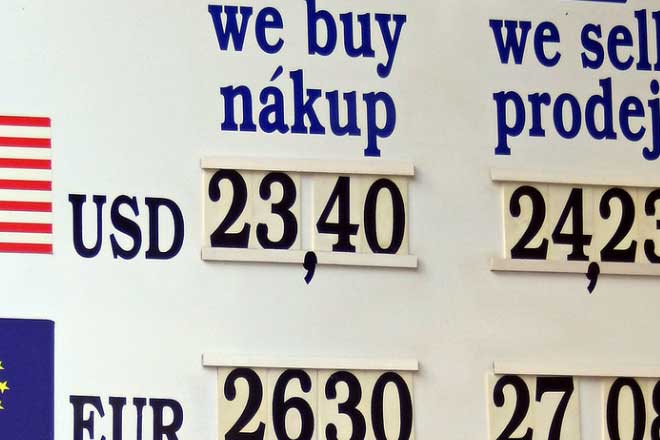 There will be a period of up to two hours people when people should withdraw from the transaction after exchanging money in an exchange office. The government approved the motion against rogue bureaucrats with unfavourable rates on Wednesday in resignation. Some time ago, the cabinet virtually rejected the proposal from the opposition.

“It is no secret that the practices of some exchange offices, especially in the centre of the capital, didn´t make a good name for the Czech Republic. In the Old Town Square, a tourist can receive 15 Crowns for 1 Euro, or a fee of 28 percent. Unfortunately, it appears that customers are not always receiving the mandatory disclosure information. Additionally, the clarity is often deliberately clouded by various VIP offers or bills for the exchange,” said Alena Schillerová, Minister of Finance (from ANO).

The standard also stipulates that clients must be informed of their new right of withdrawal, both on the exchange rate and the proof of exchange. At the same time, it limits the right to demand a fee for the execution of a foreign exchange transaction. It can only be taken into account in the exchange rate. “The clients will be able to compare the odds and will not have to calculate the amount of the sum received,” the minister said.

The precautionary measure should be limited to € 1000, which should prevent speculation on course development and abuse of the right to withdraw from the contract. According to the MF, approximately 90 to 95 percent of the exchange trades can be withdrawn.

The amendment further tightens the rules for advertising a more advantageous offer of exchange rates, registering exchange obligations and defining the boundary between currency exchange and payment services.

The law is enacted on the first day of the third calendar month following its publication. The norm must still be approved by the House and the Senate and signed by the President.

When two do the same

The same amendment was recently proposed by deputy mayors and independents in the deputies’ proposal.

However, the government did not support the proposal. Its promoters have earlier said that if the government amendment goes to the lower house, it is better to withdraw its original.

“Instead of populism, the norm could have been enacted earlier,” a government spokesman said a few days ago, the vice-chairman of STAN Vít Rakušan. According to him, Babiš’s government practices a method of rejecting parliamentary draft laws, copying them, and proposing them themselves.

On the other hand, the Ministry maintains that the parliamentary proposal rejected by the House at first reading did not, among other things, regulate the duty of money changers to inform clients of the right to withdraw, nor of the operating time in which the withdrawal can take place. There was also a change in the withdrawal for shifts made via exchange machines.

The exchange rates and the amount of the fees may vary for individual bureaux. Exchanges set them independently of the rates announced by the central bank.

The new rules for the industry have been introduced by the Foreign Exchange Act, which was approved five years ago. Exchanges must provide the customer with proof of money exchange. The details on the exchange rate must be provided reasonably and comprehensively, and the exchange offices may not exchange money under less favourable terms for the client than indicated in the exchange rate information and fees. The law also stipulated who can carry out the exchange activity and what obligations they have to fulfil to obtain permission.

Share
Facebook
Twitter
Pinterest
Email
Print
Previous articleThe CNB Has Closed the Chequepoint Exchange Office, Which Paid 15 CZK for a Euro in the Center of Prague
Next articleHow to Check Who You Are Buying a Car or Flat From
RELATED ARTICLES
News