DISCOVER PRAGUE!
HomeNewsThe Number of Tourists in Prague Continues to Grow, Albeit at a...
News

The Number of Tourists in Prague Continues to Grow, Albeit at a Slower Pace 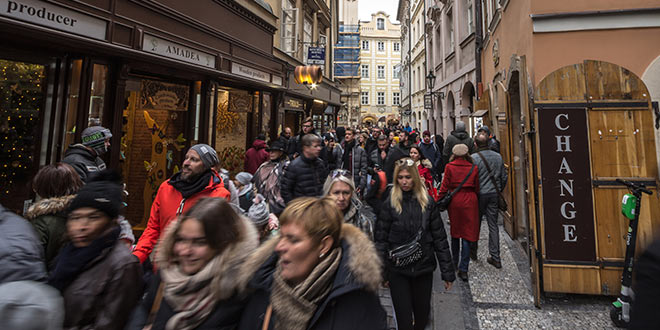 The increase in the number of tourists in the capital continues to slow down. Last year, only 1.7% more visitors visited Prague than in 2018. The number of visitors from China has begun to decline in the second quarter. On the other hand, significant increases were recorded for tourists from Ukraine (+ 28.9%), Japan (+ 16.5%) or Taiwan (+ 16.4%). Prague City Tourism published the data.

„The current tourist numbers show that Prague maintains its good reputation abroad and remains a sought-after destination. However, the fact that the average residence time of visitors in the metropolis has been at the same low level for a long time prevents from complete satisfaction, ”says Petr Slepička in charge of Prague City Tourism.

According to him, tourism is irreplaceable for the city. But it is necessary to be cultivated, so it is beneficial for the local people, not problematic.

„Our priority is to motivate our guests to stay for longer periods, visit cultural events and places outside the already overcrowded city centre. As we have expected, the number of visitors from China has started to decline at the end of the year, and the number of visitors from China will decrease at least in the first half of this year. However, we have already seen a significant drop in visitors in Prague, and we have always dealt with the situation, and I believe we can do so this time as well, “says Slepička.

The Longest Stays Are by the Russians

Visitors have spent 18 400 000 nights in the capital, the number of overnight stays increased by only 0.9%. The longest in Prague were guests from Russia (3.5 nights), Malta (3.4 nights) and Israel (3.3 nights). The average length of overnight stays remains at 2.3 nights.

In terms of nationality of visitors, 2019 did not bring much of a surprise. Germany, the United States of America, the United Kingdom, Russia, Italy, Slovakia, China, South Korea, Poland, and France have long been the most popular nationalities. There were, however, significantly more visitors from Denmark (+ 14.8%), Poland (+ 8.8%) and France (+ 8.2%).