The Prague Street NA Příkopě Is the 23rd Most Luxurious Street in the World; Fifth Avenue Is on Top 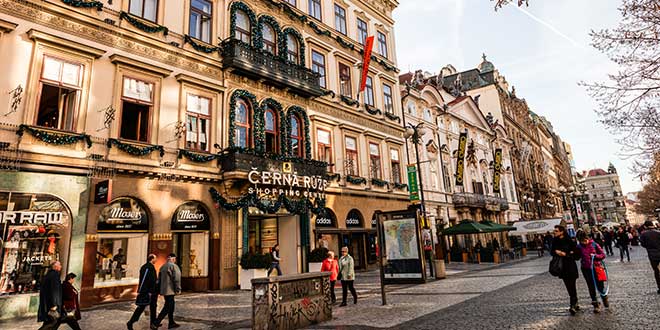 With a rent of 2400 euros (around 2530 dollars) per square metre in the Prague street Na Příkopě, the Czech Republic reached 23rd place in the ranking of the 71 most expensive shopping streets in the world. In first place remains the upper part of New York’s Fifth Avenue. The ranking list was published by Cushman & Wakefield on Wednesday. Hong Kong’s Causeway Bay is placed second.

The prices of rent in both places are going down. That is because the brands are trying to balance the demand for street stores and online stores. The Prague street Na Příkopě made it to the 23rd place from its previous year’s 25th place.

The 28th annual study this year assessed the 462 most celebrated shopping destinations all over the world, sorted by prices of rent in real estate of the highest category on the grounds of the data obtained by Cushman & Wakefield. According to this year’s edition, the rent increased for more than a third (36 per cent) of the monitored shopping streets.

The rent in Pařížská street, which is home to most of the luxury brands, increased according to a study from the beginning of the year to June by about 5.4 percent to 2340 euros (over 2340 dollars) per square metre. It is expected that the increasing demand from traders will extend the traditional boundaries of the shopping area into the neighbouring Široká street.

“The main shopping streets in the Czech Republic continue to see high demand from retailers with mass and luxury goods. It can be assumed that the value of leases in the Czech Republic will grow in the future. A strong interest of retailers in shopping areas in the city centre is illustrated by the arrival of more than 14 brands in the last 12 months,” said Jan Kotrbáček, representing the study authors.

Outside of Prague, the most important trade locality site is the centre of Brno (Masarykova street, Česká street and Freedom Square), with more than 40 thousand square metres of area.

Share
Facebook
Twitter
Pinterest
Email
Print
Previous articlePrague Is Still Scoring When It Comes to Travelers; It Is More Sought-After Than Budapest or Berlin
Next articlePrague Will Try to Speed up Public Transport; Reserved Lanes and Priorities at Traffic Lights Will Be Added
RELATED ARTICLES
News