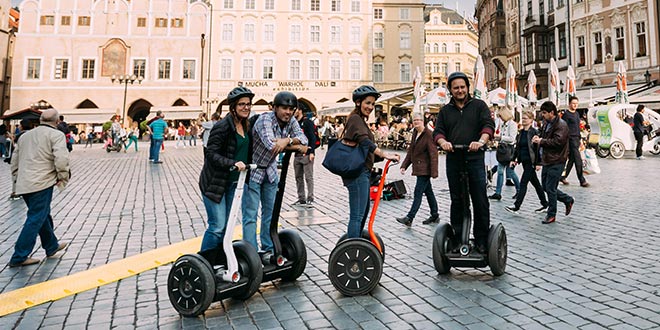 It is just one of the intersections in the city centre, where the three streets Chotkova, Badeniho, Gogolova and three municipal districts (one, six and seven) meet. That is where the border where Segways are banned from entering will lead. Therefore, eight new traffic signs will be added.

There will be two hundred and fifty similar sites where the prohibition needs to be marked again. “According to the project, there will be 610 new signs,” says Barbora Lišková, the spokeswoman for the Technical Administration of Communications (TSK) .

They will be no small signs, but large signs with the symbol “No entry of personal transporters”, i. e. a big white rectangle with a picture of a rider on a Segway in a red prohibition circle.

There will be the same thing in the opposite direction in black and white at the exit of the zone. In both cases, the sign will be on two metal columns.

However, the locals will still have to wait a while for the departure of the last Segway from the city centre. The zone marking project was handed over by the Technical Administration of Communications to the Department of Transport agendas of Prague City Hall on Friday.

“Once the measures are issued by the competent road administrative authority, we can begin,” adds Lišková. We can expect the signs to be installed roughly in November.