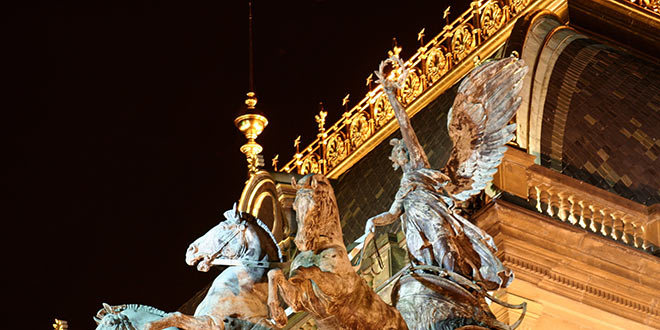 There are more than 40 theatres in Prague. Apart from big theatres with a classical repertoire, there are smallish theatres – these came into existence mostly in the sixties of the last century to criticize the totalitarian regime. They have been playing the role of critics and innovators ever since. There are also several new experimental theatres in Prague, such as the Black Theatre or the Pantomime Theatre.

One of the most popular theatres amongst visitors in Prague is the ‘black light theatre’ (visual trickery created by ‘invisible’ actors dressed in black). It is a hybrid of mime, puppetry and drama. Another popular theatre is puppetry and marionette, suitable for both children and adult (Czech performances are some of the best in the world with legendary Spejbl & Hurvinek from Josef Skupa).

There are several English theatres in Prague, but most performances are unfortunately in Czech. Prices for tickets are around 400 CZK. Usually, you can get them from the box office or ticket agencies such a Ticketpro. They have offices all over the city.

The most fabulous of all Czech theatres is The National Theatre in Prague that became the symbol of the Czech national revival period. Financial means for its construction had been raised through a nationwide public collection. Building works began in 1868, according to the plans of architect J. Zitek. However, in 1881, just as its construction was finally nearing its end, the theatre burnt out. The reconstruction took two years, and on November 18, 1883, the National Theatre was inaugurated with the Czech opera Libuše composed by Bedřich Smetana. Decoration of both exterior and interior is a work of leading Czech artists M. Aleš, F. Ženišek, V. Hynais, J.V. Myslbek and others.

Nowadays, the National Theatre consists of three art ensembles – opera, ballet and drama – which perform at three places: in the original building of The National Theatre, in The Estates Theatre and The Kolowrat Theatre.  Box-office: Mon – Sun 10:00 – 18:00  www.narodni-divadlo.cz 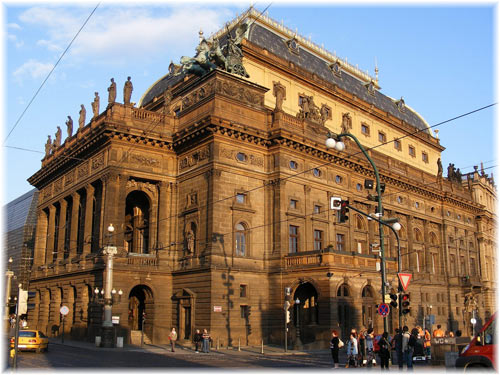 Fantasy Travellers – Gulliver and Alice in Wonderland. Gulliver won the prize for the Best Fantasy performance at the 52nd World Theatre Festival in Edinburgh. Theatre is represented by Columbia Artistic Management. www.cernedivadlo.cz

Performances of Czech drama and some foreign plays but only in the Czech language. Location: Celetna 17, Old Town. www.divadlovceletne.cz

In close vicinity of the National Theatre, the New Stage was the home stage of the multimedia theatre LATERNA MAGICA. Performances of this theatre skillfully combine film with ballet and take spectators to the world of imagination and dreams.  Location: Prague 1, Národní 4. Box-office and ticket reservations: Mon-Sat 10:00 – 20:00.

Black Light Theatre. Visitors of Prague have new possibility how to spend a free evening within Prague holidays. At the Wenceslas Square (Arcade Jalta), you can find a brand new, completely reconstructed black-light theatre called Divadlo Palace, performing a play called The Colour Dreams of Dr Frankenstein. The horror story was transformed into an amusing story about a mad scientist trying to fulfil his dream of creating an artificial human being. The performance uses tricks of black-light theatre and 3D technology. Thanks to modern technologies, the audience falls into the middle of the action, performer appears above the audience’s heads. All these tricks make the performance unforgettable. Among Place Theatre performers, you can find a breakdance world champion, an artist from the Moscow Cirk and many other outstanding personalities. Convenient central location of the theatre ensures easy access.  Location: Venceslas Sq. 43, Praha 1. website

This exciting show presents new attractions, and it is performed interactively with the audience. For example, in one of the scenes, six giant fluorescent balls descend from the ceiling, and the cheering audience pushes and rolls them from side to side. www.wow-show.com