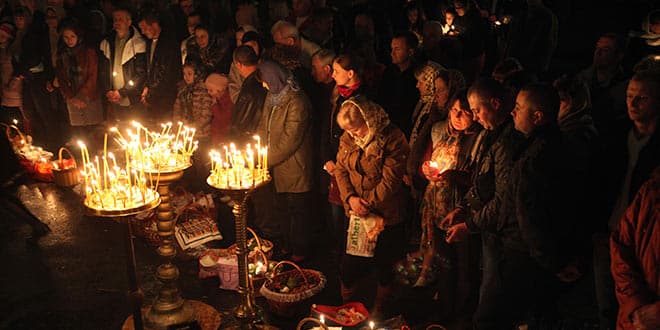 The last week of the 40 days of Lent is called Passion Week, in memory of Christ’s suffering. All the ceremonies in this week were of a mournful nature. The Passion of St. Mark was read on the Tuesday and the Passion of St. Luke was read on the Wednesday. In this week, youths walked with clappers and rattles, whose sounds replaced the ringing of bells, which according to the belief of the time departed to Rome and therefore didn’t ring. 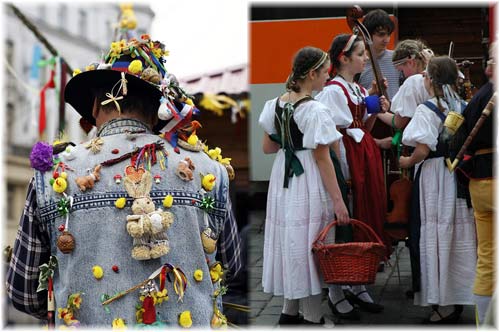 In Czech, Maundy Thursday is known as Zelený čtvrtek (Green Thursday). This name is perhaps derived from the green mass robe that was used on this day and which is still used today. Besides this, green food (spinach and various types of cabbage) was eaten on this day so that one would stay healthy for the entire year. The bells “departing for Rome” were heard for the last time in the church. They would then fall silent until Holy Saturday. A superstition existed in many places that when a bell was rung for the last time on Maundy Thursday, one was supposed to jingle money so that one would hold on to it. The sound of bells was replaced at Easter by various clappers and rattles. At mass on Maundy Thursday, the bishop and monastic heads washed the feet of 12 old men or monks. After the ceremony, he would entertain them at a banquet and give them a gift. This liturgical act is symbolically linked to the Last Supper of Christ, when Jesus did the same thing for his disciples. 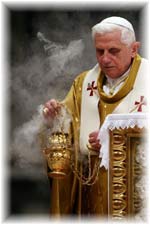 Many traditions were associated with Maundy Thursday: people got up very early on this day, and the family said their prayers. They washed themselves in dew, because they believed it prevented ailments of the neck and other illnesses. In some places this tradition was not observed until Good Friday. Housewives got up early on Maundy Thursday in order to have the house swept before sunrise, and they carried the sweepings to a crossroads so that no fleas would remain in the house. Anyone who eats bread smeared with honey before sunrise on this day is protected against snakebites and wasp stings. “Judas” pastries were baked, which consisted of specially shaped ceremonial bread made from leavened dough. Once again, it was good for one’s health to eat these daubed in honey. One is not supposed to lend someone money or have a fight with anyone on Maundy Thursday in order to ensure that people avoid all quarrels and conversely that money finds its way to them.

Good Friday is imbued with great sadness. No mass is held and the church service only consists of reading texts and singing. An important part of the devotions is the unveiling and honouring of the Holy Cross. The initially simple and restrained nature of the liturgical celebrations was subsequently modified, particularly by the Jesuits, who promoted the establishment of the Holy Sepulchre. While this originally consisted only of a cross, they supplanted it with a monstrance covered in a veil with flowers and many candles around it. They put a statue representing the dead Christ in the cavity under the altar. 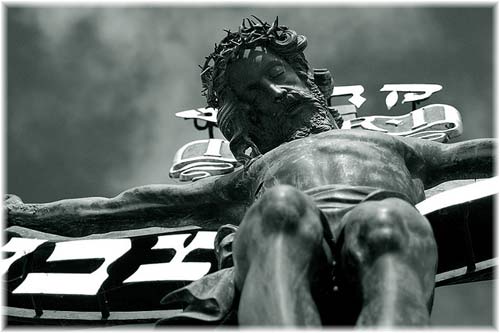 In the 17th and 18th centuries, this custom became widespread. In the Baroque era of exalted passion and mystic symbolism, cantatas were composed in honour of the dead Christ. The Jesuits introduced Passion plays. In certain areas, Passion plays became a great and immensely attractive spectacle. In Horice na Sumave, these were performed in German until the First World War and people came from far and wide to watch them. A belief in the magical power of the earth became associated with Good Friday, as did the miracles that occurred on this day. According to popular belief, the ground opened up to reveal hidden treasures for a short time. Consequently, on the evening of Good Friday, treasure hunters could be seen in forests and at castle ruins and other abandoned places. One was also not allowed to turn the earth on this day, so no work was done in the fields.

Holy Saturday is the last of the 40 days of Lent. In Czech, it is known as Bila sobota (White Saturday), and it was named after the white clothing of those who were baptised on this day. Holy Saturday was not a liturgical day in the Early Christian world. Only night-time church services or vigils were held. A vigil was actually the period (the day and night) or “eve” before major holidays. Before these occasions, a new fire was ceremonially lit and blessed, which was taken to the church with the aid of a paškál (an Easter candle made from real beeswax). The blessing of the fire soon became a ceremony. In these lands, the fire was blessed before the entrance to the church and in the popular milieu it was known as the “burning of Judas.” The day culminated in a ceremonial “Resurrection,” a ritual in honour of the resurrection of Jesus Christ.

During the ceremony of blessing the fire before the entrance to the church, which was done by a priest, the common people especially looked forward to its being extinguished because they believed that the cinders had magical powers. Anyone who owned a field was supposed to be at the burning of Judas. As soon as the edge of the fire burnt out, it was necessary to throw a few cinders into water brought in a completely new jug. Anything that was then sprinkled with this water was safe against fire and natural disasters. People also gave this water to their livestock to prevent them from falling ill that year.

The custom of carrying candles to church, which have been blessed by being lit from the sacred Easter paškál, has been preserved to this day.

Share
Previous Theatres in Prague
Next Tips for Students in Prague 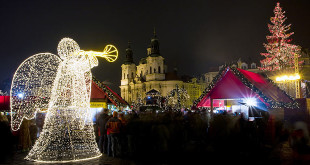 The smell of mulled wine and Christmas sweets, the warmth of roasted chestnuts in your …