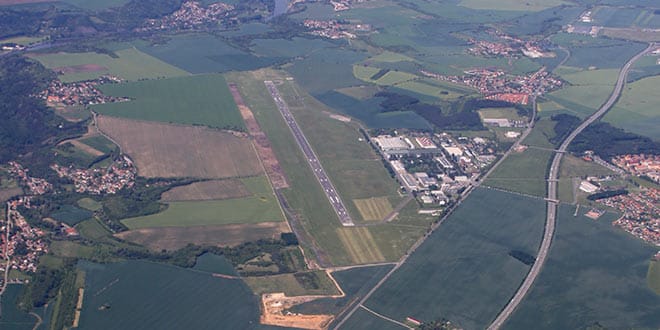 Vodochody Airport, also known as Aero Airport (LKVO), is a private general aviation airport situated in Vodochody in the Czech Republic. It is also the home to Aero Vodochody, a Czech aerospace company.

In the future, the Vodochody Airport located north of Prague wants to handle 3.5 million passengers annually, primarily featuring low-cost airline flights, charter flights, and private flights. On average, 50 aircraft a day should take off or land here, and during summer vacations when the charter flights will be added, almost 75. Regular operations are planned to commence at the turn of 2012 and 2013.

The airport should be a typical low-cost type; for instance, the passengers will be leaving the planes on the stairs. It should take about half an hour from Vodochody to Downtown Prague by bus. The Vodochody Airport will compete primarily with Praha Ruzyně Airport, which handles about 12 million passengers annually. There are very few capitals in Europe with only one airport.

Nevertheless, besides taking over the passengers from the Praha Ruzyně Airport, the Vodochody Airport will target its own passengers, especially via the low fares.

If the plan realizes successfully and the current factory airport of Aero Vodochody becomes the commercial airport, Vodochody will then house the second largest airport in the Czech Republic. So far, this rank has been held by the Brno-Tuřany Airport with approximately 450,000 passengers annually. Vodochody Airport is part of the Aero Group controlled by Penta.