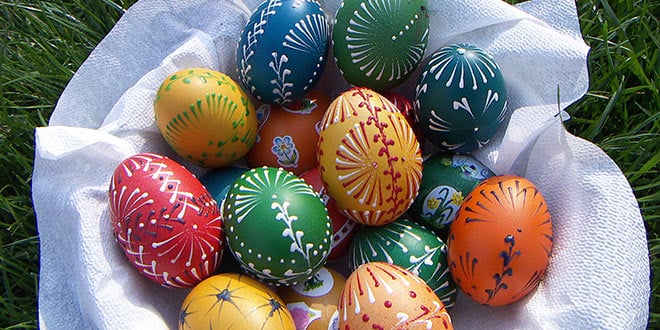 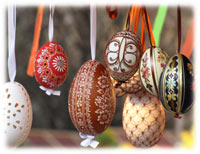 During mass on Easter Sunday, the priest blesses the food that has been brought (lamb, rabbit, Easter cake, eggs, bread, and wine). This consecrated food is taken home again by housewives and ceremonially eaten by the family during a festive lunch. It was believed that anyone who got lost would find their way home when they remembered whom they had eaten Easter lamb with. In East Bohemia, part of the consecrated food was taken to the fields, the garden and the well to ensure a good harvest and an adequate supply of good water. 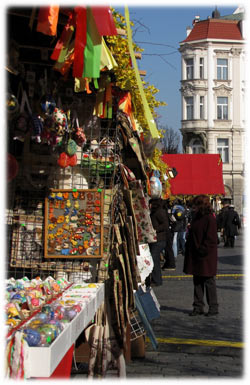 From the point of view of the Bohemian people, Easter Monday was the most important day of the Easter cycle even though it was not connected with any significant liturgical acts. This was the day of Easter feasting and of the Monday whipping. This custom is probably of very ancient origin, just like the decorating of eggs (Easter eggs), which is the most recognisable symbol of Czech Easter. There are many Easter egg decorating techniques, and the more elaborate ones require a certain level of skill. Different materials can be used, such as beeswax, straw, watercolours, onion peels, and picture stickers. There are no limitations to creating pretty, colourful eggs. Originally, it probably concerned a magic ritual in which only adults participated. It only became a pleasurable diversion over time. Young lads went from house to house looking for girls (later mostly children) with Easter sticks of wicker adorned with ribbons. They flogged the girls and the women in the house with these. They gave congratulations and received painted eggs. 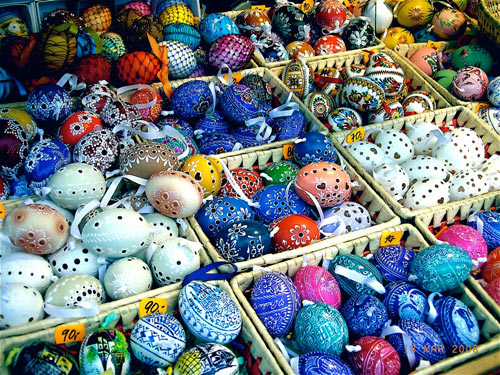 This basic pattern of Easter flogging had some local variants. In many places, it was the custom that the girl would return the compliment and go around with an Easter stick on Tuesday. In some places, instead of the stick, they poured water on the boys so that they would be invigorated. In many villages, it was an age-old custom to lie in ambush for girls early on Monday morning and whip them so that they would be healthy for the entire year and cheerful and, above all, hardworking. The memoirs of the Prague preacher Konrad Waldhauser, who lived in the 14th century, bear witness to the age-old nature of the Easter whippings and the unaltered form they have enjoyed for centuries. He attests that on Easter Monday and Tuesday, spouses and lovers whipped each other with rods and also flogged each other by the hand. Those who were sleepy or slothful were supposedly thrown into the water early in the morning or at least had water poured over them.

Young, live pussy willow twigs are thought to bring health and youth to anyone who is whipped with them. An Easter pomlázka (originating from pomladit or “make younger”) is a braided whip made from pussy willow twigs. It has been used for centuries by boys who go carolling on Easter Monday and symbolically whip girls on the legs. In the past, pomlázka was also used by the farmer’s wife to whip the livestock and everyone in the household, including men and children. Boys used to make their own pussy willow in the past (the more twigs, the more difficult it was to braid one), but this tradition and skill are long gone, and pussy willow can be bought in stores and street stands. 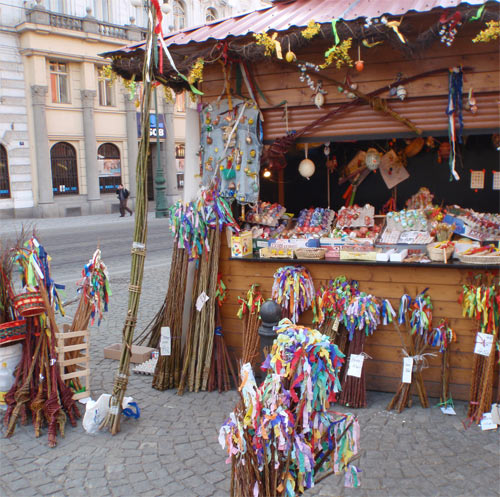 Easter Traditions in the Czech Republic

are still largely upheld, especially in villages and small towns, although they may have lost their symbolism and romance, now being performed mainly for fun. Some boys and men seem to have forgotten that the whipping is supposed to be only symbolic and girls don’t always like that. The reward has also changed – money and shots of plum brandy are often given instead of or in addition to painted eggs and candy. So by early afternoon, groups of happy men can be seen staggering along the roads. But despite all of that, Easter remains one of the most joyful holidays on the Christian’s Czech calendar.