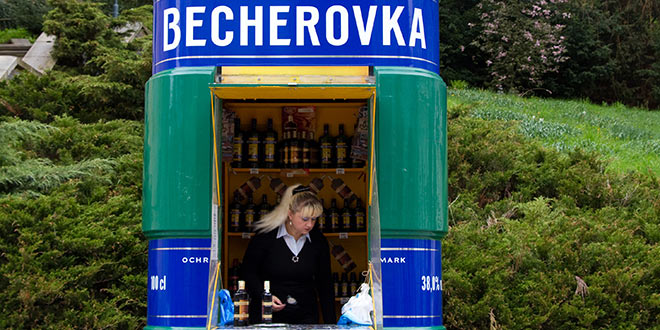 Czechs are the proud owners of a unique, herb-based liquor named: ‘Becherovka‘. This liquor is hard to explain to someone unfamiliar with it because it’s not like any other type of drink. Its’ ingredients, actually, are a guarded secret—and its’ recipe is kept under lock and key so only an authorised person can produce it. Its’ most instantly recognisable characteristics are cloves and chamomile; should you possess a very refined palate, you might also notice more than this. It’s quite Christmasy and sweet but consumed by people throughout the year.

Becherovka gets produced in Karlsbad (Karlovy Vary), which is a spa town. It was made, originally, as a supplementary treatment for patients who would spend their time-consuming mineral water, taking walks outside and bathing in steam baths. As a result, it’s reported to contain medicinal benefits. A small amount just after work is believed to be a more wholesome way to steady the nerves than, for example, scotch is; it’s sometimes consumed for an aperitif; and, when drunk as a liqueur after dinner, it’s thought to assist with your digestion. Some people even utilize it quite often to get rid of colds.

Slivovitz (plum brandy or Slivovice) is an additional local delicacy, drunk and made more in Slovakia and Moravia, where it originates. This is a strong spirit—transparent, derived from plums and poured into a small shot glass. This is also believed to possess medicinal benefits, although only when taken moderately. The top maker of Slivoviceis is Jelínek, who make a fruity, smooth variety that closely mirrors the homemade (domácí) Slivovice that many purists regard as the ultimate. Schnapps styled drinks resembling this can also be made from meruňkovice (apricots), hruškovice (pears) and třešňovice (cherries). The standard of these varies considerably—a cheaper brand or poorly made distilled drink concocted at home can be quite dire, although the well-made ones are often fantastic.

Czech rum is the drink of choice for many during the winter, particularly when it’s served in a hot cup of tea and adorned with lemon (known as: ‘grog’). Czech rum is derived from sugar-beets, as opposed to sugar-cane and, thus, is dark brown in colour and  very sweet and strongly flavoured. To abide by E.U. rules, Czech rum makers have adopted the banner ‘tuzemský’, which means ‘domestic’, to better differentiate their rum from the local rums made from sugar cane. Consequently, rather than calling it ‘rum’, they call it ‘tuzemák’ or ‘tuzemsky rum’. Personally, though, it’s not to my taste.

Just as bad, in my view, is Fernet. This drink is even thicker and darker brown and has a very bitter taste. Its’ ingredients are kept secretive, so many have said that it includes fermented bugs. You can mix it with some tonic water to produce a drink that resembles beer and is, therefore, sarcastically nick-named ‘Bavarian beer’ (bavorské pivo).

Gin and Vodka are also made locally, although their standard is much lower than their overseas equivalents. You also, sometimes, witness people in public houses necking shots of glowing peppermint liqueur (often called: zelená—’green’), which isn’t hugely appealing.

Maybe surprisingly, the market in the Czech Rep for absinthe is also active. This is a hazardous drink, derived from wormwood, that was popular with the Left Bank poets and artists of Paris in the 1920s. To enjoy it properly, you have to ignite a tea-spoon of sugar and then mix it into the melted sugar before drinking it.

Ordering a Beer in a Czech Pub