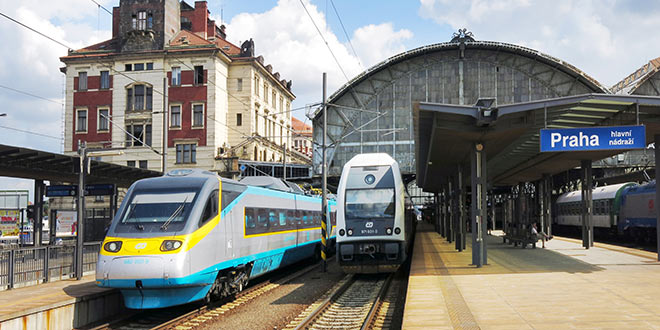 Prague’s main train station is one of the final architectural glories of the dying Habsburg Empire, designed by Josef Fanta and officially opened in 1909 as the Franz-Josefs Bahnhof. It was later renamed Wilson Station and today is generally referred to as the Main Station. Between 1972 and 1979, the station was extended by a new terminal building, including an underground station and the main road on the terminal roof. 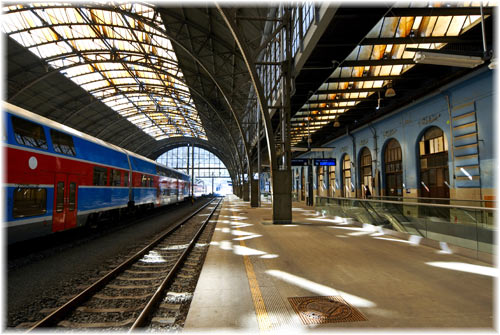 If you are just quickly passing or arriving by metro, it’s easy to miss the station’s surviving Art Nouveau parts; mainly the lofty dome, stained glass windows and carved faces of women representing Prague as the ‘Mother of Cities’. Upstairs, the original entrance next to Fantova Kavarna (Café) still exudes imperial confidence, with its wrought-iron canopy and naked figurines clinging to the sides of the towers.

The station is conveniently located just five minutes’ walk from Wenceslas Square and is connected by metro line C with other parts of the city. Main Station is also connected with Prague Airport by an express bus departing every 30 minutes during daytime hours (travel time 25 to 40 minutes). Outside the terminal, you will find taxi stands. Unfortunately, it is not recommended to take any of those taxi cabs hanging around the train station, as you will very likely be charged an inflated fare. Instead, call one of the reputable companies, or pre-book a taxi with Prague Airport Transfers.

If you arrive in the middle of the night – the station closes from 12.40 am to 3.40 am, and the surrounding area is infamous for pickpockets, drunks and homeless people.

Recently, Prague’s Main Station (Hlavni nadrazi) was fully renovated and modernised in 2010-2011 by the Italian company Grandi Stazioni to western standards from its former ‘dirty’ image of a shadowy part of Prague’. The station itself is split over several levels. There are all the facilities you would expect at a train station, including a left luggage counter which is open 24 hours, and automatic large luggage lockers. There are also exchange offices, ATMs, tourist and train information desks, fast food stalls, and restaurants (such as Burger King), café shops and retail shops.

Travelling Out of the Hlavni Nadrazi Train Station

Although the Hlavni Nadrazi Train Station is essentially downtown, travelling to the hotel you have booked can be rather challenging. The toughest obstacle is that the cab drivers at the “official” train station stand are a group of neckless mafia heavies who are just looking for an opportunity to charge arriving tourists five times the normal fare. To find a reputable cab driver, leave the main hall of the station via the large glass doors, and then walk fifty yards across the park onto Opletalova street (several cabs are normally parked at the front of the Chopin Hotel, on Jeruzalémská street corner). Before entering a cab, always clarify the total price for your destination, and be sure that the cabbie turns the meter on—it should not cost you over 300CZK to reach your hotel in the centre of the city, or any more than 500CZK if travelling to the suburbs of the city. As an alternative, book a cab in advance from the Prague Airport Transfer company and a driver will await you upon your arrival.

Given that you do not have to carry much luggage, it is obviously better to use the Metro. It is very inexpensive and simple, with several departures. When you are on the Metro, search for a red ‘M’ with two directions: Letňany or Háje. To buy a ticket from the automatic machine next to the entrance to the Metro, you will require some Czech coins. Verify your ticket using the yellow machine before you take the stairs down to the train tracks. To reach Lesser Town or Old Town hotels, take the Háje-bound train to the stop at the Museum, and then change onto the green line (travelling to Dejvická), getting off at either Staroměstská or Můstek; both of these stops straddle the Old Town.

The majority of the Old Town hotels I listed are approximately a 20-30-minute stroll from the train station. Leave the station and head to a small park, stroll across the park, then walk across the road on the opposing side. Walk down Jeruzalémská street until you get to Jindřišská Tower & tram stop, stroll beneath a small archway, and then carry on partially to the right heading down Senovážná street. Once you reach the street’s end, you will notice the Powder Gate—this is the official Old Town entrance—on the left-hand side. As an alternative, the New Town Wenceslas Square is only around a ten-minute stroll—leave the station, walk across the park, then carry on walking on the left-hand side through Opletalova street.

It is possible to purchase tickets online at the Czech railway website 60 days before travel for destinations in the Czech Republic and selected destinations in the EU. You can also buy them from any train station in Prague or elsewhere in the Czech Republic. At Prague’s main train station, the ticket counters are on the basement level. Most locals do not make reservations, and tickets are generally available to all destinations right up until the day of travel. If you are in a hurry, it is also possible to buy a ticket from the conductor, but be prepared for an extra charge. 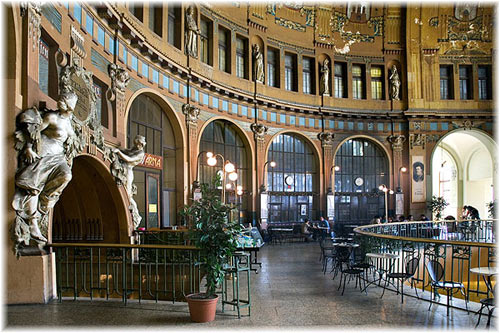