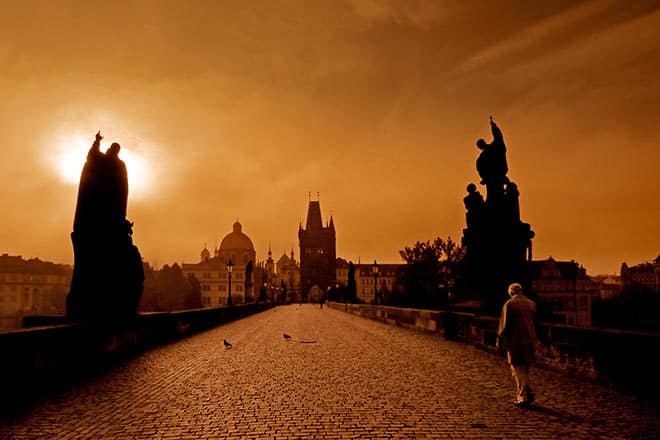 Prague is a city that will captivate you not only with its beautiful architecture but also with mysterious stories hidden in the walls of its houses.

Almost every monument boasts some legend that is associated with it. Try to discover these stories during your visit to Prague.

Another well-known legend is associated with the Old-New Synagogue. The remains of an artificial being, Golem, are said to lie in the attic of this synagogue. In the 16th century, Rabbi Loew created the artificial Golem creature from clay. The Golem could be revived by using parchment with secret symbols inserted into his mouth. The Golem resembled a man and had great strength. He helped and protected the inhabitants of the Jewish City. Every day, the rabbi gave him tasks. One day the Golem was supposed to bring water, but he brought it so much that he flooded the entire corridor. The Golem’s strength was increasing. On Saturday, the Golem rested. However, one Friday, the rabbi forgot to remove the revitalizing parchment from his mouth, so the Golem began to rage and destroy houses in the Jewish City instead of taking Saturday’s rest. The rabbi stopped him, pulled his parchment out of his mouth and never revived him. The renowned Rabbi Loew has a grave in the Old Prague Jewish Cemetery, located near the Old-New Synagogue.

The oldest bridge in Prague is Charles Bridge. It is located near the place where a ford once connected the Old Town and the Lesser Town. Emperor and King Charles IV built Charles Bridge. During his reign, Prague thrived. Charles IV laid the foundation stone for the new bridge on July 9, 1357. According to rumours, he wanted to build the world’s strongest bridge that would be immortal. One day the bridge builders got the idea to add eggs to the lime. Charles IV was enthusiastic about this idea and ordered the towns and villages to send him eggs to build the bridge. Full baskets and carts of eggs began to be transported to Prague. North of Prague lies the town called Velvary. The local councillors were afraid of breaking the eggs on the way, so they decided to send boiled eggs. Whether this legend is true or not, Charles Bridge still stands today.

Prague Castle, the seat of Czech kings, is associated with many legends. One of them is linked to the largest Czech bell, which hangs in the main tower of St Vitus Cathedral. This tower is 97 meters tall, and there is a bell inside that weighs 17 tons and is called Sigismund. The bell dates from the 16th century. At that time, it wasn’t easy to pull up such a big bell up into the tower. And that’s what the old legend is connected to. Sixteen pairs of horses brought the bell to Prague Castle, but it seemed impossible to pull it up into the tower. Even the king did not know what to do and began to fear that the bell would never ring and remain in the courtyard. The royal daughter, who was smart and educated, got the idea to knit a thick rope from the court ladies’ hair. She also had a sophisticated machine built and placed next to the main tower of the cathedral. Many residents gathered in the courtyard the day the bell was to be pulled up into the tower. The crowd was astonished. Thanks to the princess and her idea, the bell hanging on a rope made of real hair were lifted into a tower where it can be seen even today.