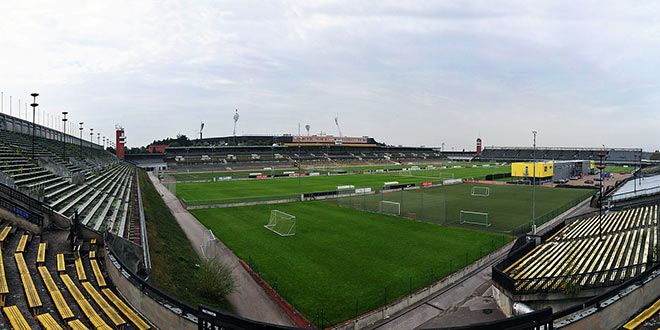 The Great Strahov Stadium (Strahovský stadion in Czech) is a stadium in the Strahov district of Prague. It was the largest stadium in the world and is the second-largest sports facility worldwide after the Indianapolis Motor Speedway, seating around 220,000. The Stadium is situated near Petrin Hill overlooking the old city. It can be easily accessed by taking the funicular up the hill through the gardens. 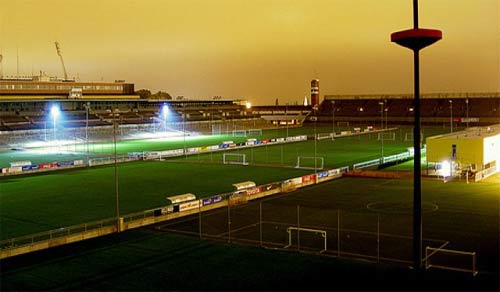 Construction began on a wooden stadium in 1926, which was replaced by concrete grandstands in 1932. Further construction occurred in 1948 and 1975. In the years 2001 – 2002 stadium undergone a progressive reconstruction (tartan, signboard, seats, sound technique, lighting, monitoring system, rebuilding of playing field and installation of grass heater). The playing field, surrounded by seating on all sides, is 63,500 square metres. Currently, the Stadium serves Sparta Prague as a training centre with eight football pitches (six pitches of standard size and two futsal pitches).

The original Stadium date from the First Republic between the World Wars and served as a venue for Sokol displays of synchronised gymnastics on a massive scale. It was later used for large displays during the communist era. Performances with several hundred gymnasts making various complex formations and exercising identically, while accompanied by traditional folk music, attracted the attention of many visitors. Each time, among the highly popular shows, were those of young, well-trained recruits who wore only boxer shorts during the display or women dancing in miniskirts. The groups of gymnasts (unlike the soldiers who were ordered to practice and participate) were put together from keen local Sokol Athletic Association members who regularly trained for the show throughout the year before the event, repeated every five years. The ambiguous name of the performance, Spartakiáda, referred to the former power and strength of the slaves who rose under the leadership of Spartacus.

Recently, apart from being Sparta Prague’s training ground, the Stadium is used for holding huge concerts. Bands that have played there include Pink Floyd, The Rolling Stones, U2 and Genesis. On August 18, 1990, Strahov Stadium hosted a Rolling Stones concert with more than 150,000 people in attendance, including President Václav Havel.

The future of the Stadium will depend on adaptive reuse and preservation of this unique structure. There are plans to convert the mammoth Strahov Stadium complex into a commercial zone complete with hotels, restaurants and shops. Another suggestion is to turn the area into a leisure mecca for the 21st century. There are also plans to rebuild the area as an Olympic village if Prague wins a future Olympic bid.