Stroll Along the Vltava 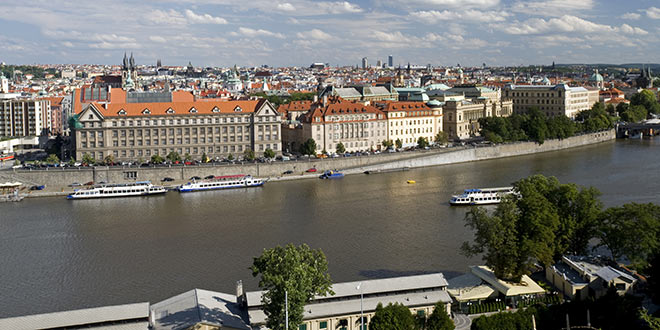 For centuries, the Romantic Vltava River has inspired writers and musicians, notably Bedřich Smetana, whose symphonic poems dedicated to the river celebrate its long journey across the Czech Republic to Prague. The Vltava River, which separates Prague into two parts, is a great place for a stroll and to explore Prague itself. A walk along the banks of the Vltava offers great views while you discover interesting historical monuments and memorials. If you prefer not to walk, you can also book an afternoon lunch or evening dinner cruise on the river. 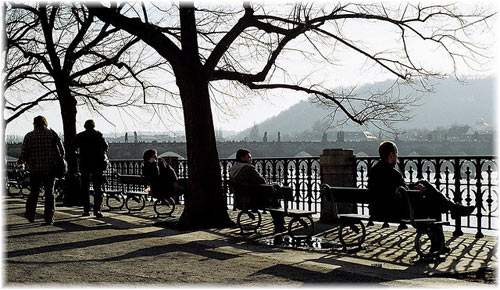 On the Right Bank of the Vltava

On the right bank, one can visit the peaceful grounds of Vyšehrad, the Emmaus Monastery, Žofín and the National Theatre.

While at Vyšehrad, it is worth taking in the castle ruins, the Cathedral of Sts Peter and Paul and the Czech National Cemetery Slavín. The Cathedral is dominated on the outside by the two towers, while inside the figural secession décor and the Baroque paintings have adorned the interior of Vyšehrad since 1420.

The Emmaus Monastery is located near Palackého Square. Its two strikingly modern spires were added during a reconstruction resulting from damage caused during the Second World War. Each gilded spire measures four metres in height. During the monastery reconstruction, a 15th-century sign written in the Glagolitic alphabet was discovered, the first and only time that Glagolitic writings have been found either in the Czech Republic or in Western Slavic countries generally.

Žofín, with its bright yellow exterior, is situated on Slovanský island, almost directly across from the National Theatre. Since 1837, it has been one of the most important centres of cultural and social life. Its grandiose halls, reconstructed after the floods of 2002, often host important concerts and events.

The National Theatre is one of the most important theatres in the Czech Republic. It is situated on the Smetanovo embankment, not far from Charles Bridge.

On the Left Bank of the Vltava

On the left bank, visitors can see Prague Castle, Petřín Hill and the pendulum at Letná.

Above the Vltava’s left bank in Hradčany. Its position affords visitors a beautiful panorama stretching from Vyšehrad all the way to the Rudolfinum.

The so-called Strakova Academy, a new Baroque building and the current seat of the Czech government, is situated beneath Prague Castle. From 1896 this building was used as a student dormitory for the poorer sons of the Czech aristocracy. It became the seat of ministerial and state representatives after the emergence of the independent Czechoslovak Republic in 1918.

The summit of Petřín hill in the Lesser Town can be easily reached via a funicular. Petřín hill is dominated by the Petřín tower, which bears a resemblance to the famous Eiffel Tower. After an ascent of 299 steps, visitors reach the lookout area, which offers splendid panoramic views over Prague.

The metronome at Letná park is visible from as far away as the river. It was erected at the beginning of the 1990s and measures 25 metres.

The river can be crossed either at Charles Bridge or at Čechův bridge.

Charles Bridge is the oldest of Prague’s many bridges. The construction of the bridge was begun in 1357 by Petr Parléř. The bridge was made from sandstone blocks and is 515 metres long and 9.5 metres wide. It is decorated with statues, most of them from the 18th century, though the oldest statue on the bridge is that of St. John of Nepomuk and dates back to 1683. The bridge is fully pedestrianised.

Čechův Bridge was built in 1908 and is the only iron-arched bridge in Prague. Four of the bridge’s statues, sculpted by Antonín Popp, are perched atop 17-metre columns and are visible from afar. Two of the sculptures (facing against the current of the Vltava) represent forebearers. A second pair, looking in the current direction, is six-headed hydras bearing the symbol of Prague. 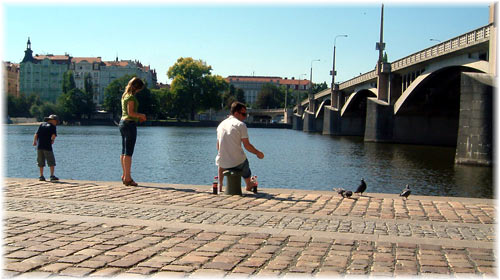