Prague (in Czech “Praha”), the capital of the Czech Republic, is situated on the Vltava River. The capital has the largest number of tourist attractions ranging from medieval buildings, museums up to dozens of annual cultural and social events. Today Prague’s population is around 1.2 million inhabitants.

Prague was first settled in the ninth century by the Přemysl dynasty, which remained in power for nearly 500 years. In the mid-fourteenth century, the Bohemian king and Holy Roman Emperor Charles IV founded Charles University in Prague. He was also responsible for constructing the renowned Charles Bridge spanning across the Vltava River, a major tourist attraction. In 1526 the Hapsburgs came to power in Prague, and not until the end of World War I and the collapse of the Austro-Hungarian Empire did they relinquish control of the city. In 1918 Prague became the capital of the newly formed democratic republic of Czechoslovakia.

In 1968 a movement known as the Prague Spring attempted a series of liberalizing reforms from within the government, only to be crushed by the Warsaw Pact forces led by the Soviet Union. In 1989, non-violent protests on Prague’s Wenceslaus Square toppled the Communist government in the Velvet Revolution (so named because of the lack of bloodshed). The new democracy elected as its president the prominent Czech playwright and philosopher Vaclav Havel, who follows Prague artists’ long tradition, including composer Antonin Dvorak and writer Franz Kafka. In 1993 Czechoslovakia split into two parts, with Prague remaining as the capital of the Czech Republic. 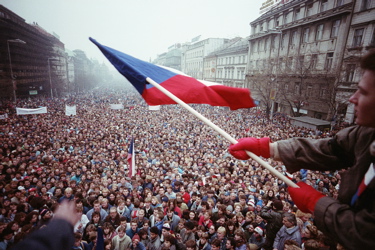