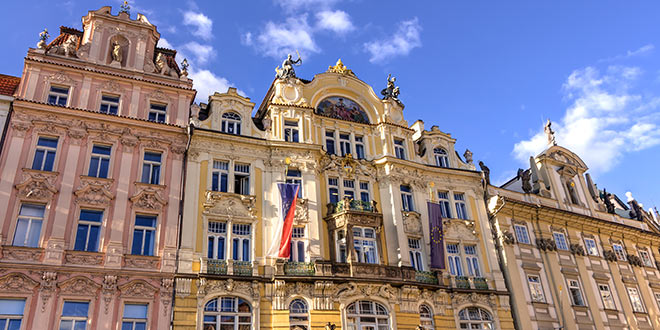 The Spires and Domes of Prague

The spires and domes of Prague’s churches are the city’s major landmarks, as views from the numerous vantage points verify. You’ll witness various towers, domes and spires: Neo-Gothic (the churches of St Paul and St Peter) and Gothic (the church of ‘Our Lady Before Tyn’) zoom up to the sky, whilst the Baroque (St Nicholas’ Church in Lesser Town or Loreto) usually have curved cupolas and domes shaped like onions. The recently made top of Emauzy, the fourteenth century Slavonic Monastery, built following a strike on the church in an air raid in the 2nd World War, is an uncommon instance in Prague of modern theological architecture. It is’ swarming, bisecting dual spires are a stark reinterpretation of themes from the Gothic era and a stunning supplement to Prague’s skyline.

The Decorative Portals and Gates of Prague

The intricate portals and gates on the palaces of Prague are amongst the most splendid and picturesque architectural landmarks of the city. Renaissance and Gothic portals have survived frequently, even when the structures themselves have been modified or destroyed by subsequent renovations in different architectural styles. The era of the most widespread renovation was during Baroque times, and distinct portals that were made can be viewed framing lots of grandiose entrances around Prague. Statues of heroes, mythological figures and giants are frequently displayed supporting doorways. These weren’t only for decoration as they served as a vital part of the support for the buildings.

Prague’s best Romanesque structure is the Basilica of St George at Prague Castle. Several stone-built Romanesque rotundas survive undamaged in Prague, though most have since been transformed into larger churches. Examples include the Rotunda of St Longinus in New Town, the Rotunda of the Holy Cross in Old Town, and the Rotunda of St Martin at Vysehrad. Another example is the Palace of the Lords of Kunstat.

The Gothic style flourished in Prague from the 13th to the 16th centuries, until the rule of Charles IV. The best examples of Gothic style are the eastern part of St Vitus Cathedral at Prague Castle, the Gothic design of the Charles Bridge, the Old Town Bridge Tower and the Church of Our Lady of the Snows. Other fine Gothic buildings in the city include the Convent of St Agnes and the late-Gothic Powder Gate.

When the Habsburgs took over the Bohemian throne, they invited Italian designers and architects to Prague to help create a royal city worthy of their status. The mixture of local and Italian styles gave rise to a distinctive ‘Bohemian Renaissance’ style, featuring heavy ornamental stucco decorations and paintings of historical or mythical scenes. The rebuilding of the Hradcany Castle area and Lesser Town after a huge fire in 1541 was undertaken mostly in the Renaissance style.
The best example of Renaissance style is The Summer Palace (Belvedere) in the gardens to the north of Prague Castle. Other fine examples of Renaissance buildings including the Ball-Game House, Schwarzenberg Palace, the House at the Minute and the Star Summer Palace.

In the aftermath of the Thirty Years’ War, when the Habsburg Empire embarked on a campaign of reconstruction and re-Catholicisation of the Czech lands, many baroque churches and palaces, villas and townhouses were built. It was the grandest period in Prague’s architectural development, responsible for the largely baroque face you see in Prague today.
A remarkable example of Prague baroque is the Dientzenhofers’ Church of St Nicholas located in Lesser Town. Other Dientzenhofer contributions to Prague’s cityscape include: Church of St John Nepomuk, Church of St Margaret in Brevnov, Vila Amerika (today housing the Dvorak Museum), Church of St Nicholas in Old Town and Goltz-Kinsky Palace and Loreta located in the Prague Castle Complex.

The most famous buildings in the so-called neo-Renaissance style include the National Museum, Rudolfinum and National Theatre. Another remarkable examples includes Theater of the Estates (Ovocný trh), the facade of Slovansky House (Na Příkopě 22), The Church of the Holy Rood (Na Příkopě 16) and The Hybernian Palace (náměstí Republiky).

As the end of 19th century Czech architecture came under the spell of Art Nouveau. The building of the Palace of Industry for the Jubilee Exhibition of 1891 saw the first arrival of Art Nouveau in Prague. Over the next two decades, it became the favoured style of the city’s middle classes. When the Jewish ghetto of Josefov was cleared in the late 19th century, and the broad boulevard of Paizska was driven through the former slums, fashionable new apartment blocks in the Art Nouveau style were built along its length.
The most impressive examples of The Art Nouveau style include the Hotel Central on Hybernska, the famous Grand Hotel Evropa on Wenceslas Square and the Hotel Pariz. The dome of the Main Train Station is another fine example. But the city’s finest expression of Art Nouveau architecture is the Municipal House.

In a short period of just ten years (1910-20), barely half a dozen architects bequeathed to Prague a unique legacy of buildings – mostly private homes and apartment blocks – the Cubist movement influenced art. Probably the best examples of Cubist style can be seen at Vysehrad – the Vysehrad citadel. Another example is the terrace of three houses at Rasinovo Quay no. 6-10 and the House of the Black Madonna which also houses the Museum of Czech Cubism.

After the creation of Czechoslovakia in 1918, the architectural style was followed by a wave of excitement, influenced by new technology and materials, and by the streamlined forms of modern transportation such as cars and locomotives. Form and purpose were merged dramatically in a new movement that became known as Functionalism. Functionalist buildings were typified by their extreme geometric simplicity, clean lines, and modern materials such as reinforced concrete, plate glass and steel.
Good examples of this style include Church of the Most Sacred Heart of Our Lord, Bata shoe store on Wenceslas Square and the vast Veletrzni Palace, built as an exhibition space and is now home to Prague’s main gallery of modern art. Other Functionalist masterpieces include the Manes Gallery and Villa Muller and the Congress Centre in Vysehrad.

Prague’s post-1989 architecture can be characterized as a mixture; some buildings quite out of keeping with their surroundings, some really ugly, and some amazingly attractive. The best example of new architecture is the Dancing House on Rasinovo Quay. 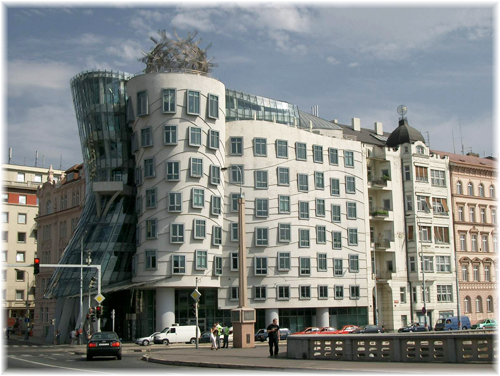